By Glenn Astarita
November 11, 2014
Sign in to view read count 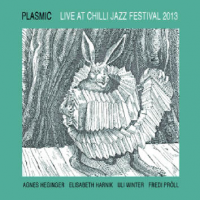 This European outfit started as a trio in 2003, and extended its reach by integrating avant-vocalist Agnes Heginger into its rather pliant mode of operations amid some asymmetrical shenanigans, devious interactions and shifty dialogues. The live recording imparts an air of excitement into your listening space, as the artists' push and prod each other within the idea department. And each musician is a catalyst at various times throughout the course of the program, including Heginger's skittish vocalizing and extraterrestrial -like discourses.

The improvisation element is comprised of topsy-turvy mini-motifs stitched together into a polytonal mosaic. On "Salita," the quartet balances near silence with Uli Winter's creaky arco lines, leading to an unnerving emotional outcome, subsequently highlighting Heginger's extended range and her ability to hold a note for lengthy intervals. Moreover, Elisabeth Harnik's gentle plucking of her piano strings add a rather fiendish aura to this piece, yet on the following track "Apertura," Heginger's breathy explorations in the lower tonal range, set an unassuming point of entry for "Thi Gam" which is a piece designed with a multihued canvass, featuring Harnik's stammering block chords and drummer Fredi Proll's rumbling grooves. Thus, all hell breaks loose via Heginger's unorthodox scat delivery, as she helps raise the pitch.

The band closes out and offers additional surprises with "Laburnum, " where swirling choruses, groans and hums consummate a spellbinding and wily live performance that gets high marks for its elevated form of entertainment. Essentially, the musicians place more emphasis on performing for the audience and not within a vacuum.

About Off Into the Endoplasmic Reticulum