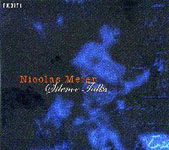 Like the saxophonist/flautist Gilad Atzmon, guitarist Nicolas Meier is a British-based musician exploring the rich synergy between jazz and Middle Eastern folk musics. Atzmon's synthesis is primarily shaped by Israeli music, but includes the traditions of neighbouring Arab countries. Meier's focus is Turkish, and also extends to neighbouring countries, particularly to the Balkans, with added flecks of Spain.

How Swiss-born Meir's exposure to Turkish music came about is unknown—whether it was via his Turkish wife, or whether the couple met during one of Meier's frequent visits to the country. Either way, Meier's acculturation is deep: inside and at ease with Anatolia's distinctive rhythms and melodies, and eschewing the manufactured, cod-dervish "trance" thrashes to which European/Turkish fusions are prone.

Atzmon is a regular Meier collaborator, and the compelling Silence Talks is the third Meier album on which he's been featured, following Orient (Naim, 2005) and Yuz (Naim, 2007). Also featured on all three albums are Asaf Sirkis, the drummer in Atzmon's Orient House Ensemble, and bassist Tom Mason.

All seven tracks are originals and most owe as much to Turkish music as they do to jazz. Meier's rhythms and harmonies are generally within an Anatolian paradigm, as are the variations in tempo and dynamics which are features of his arrangements. The music moves gracefully back and forth between Europe and Turkey. Only the improvising aesthetic is predominantly jazz-based, with Meier and Atzmon, the key soloists, forwarding motivic rather than reiterative lines.

Meier's technique is phenomenal. Dextrous and vigorous, favoring giddily-fast fingered, serpentine single note runs, it is musicianly in the best sense of the word. Atzmon, no technical slouch either, is the more intuitive and emotional player. He wears his heart prominently on his sleeve whether on a wild dance tune like "Dance in the Rain," the Pat Metheny-esque, flamenco-flavored "Deja Vu," or a gently-paced ballad like "Deniz's Love."

Mostly, Atzmon plays warm-going-on-hot vocalized saxophone, but he contributes a lovely clarinet solo to the delicate title track. Guest clarinetist Giorgio Serci shines as brightly on the closing "A Rose in the Pyrenees." Sirkis and Mason stoke the fire with weight and laser-precision.

A rewarding listen for anyone who doesn't think jazz stops east of the Hudson or west of San Francisco bay.