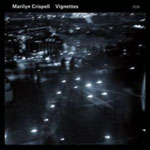 A relative latecomer to jazz, occupying the classical and contemporary composition spheres until the age of 28, Marilyn Crispell's early ventures into jazz and improvised music were in the context of a more aggressive approach informed by Cecil Taylor. Over the past decade, however, while the pianist's sense of adventure hasn't diminished, she's introduced a sparer lyricism, making three previous ECM releases—1997's Nothing Ever Was, Anyway, 2001's Amaryllis and 2004's Storyteller—works of rare beauty, where her musical trilogues have been more akin to soft conversation than spirited debate. The same attention to strength through space, subtlety, gentility and melodism that has defined those piano trio albums is even more evident on Vignettes, her first solo piano album for the label.

The title is appropriate, with a series of seven freely improvised "Vignette" pieces scattered throughout the disc. Crispell may work in a similar area of miniatures as pianist Jon Balke on his outstanding Book of Velocities (ECM, 2008), but her explorations can go to greater lengths, with the poignant "Sweden" and melancholy "Cuida Tu Espiritu"—the latter one of only two non-original compositions, preconceived or spontaneous, on Vignette—exceeding the seven minute mark.

Crispell's sense of lyricism is clearer, more direct than Balke's, although her classical upbringing remains a part of her personal aesthetic, with the especially spacious and ethereal "Vignette II" possessing an abstruse new music ambience. The immediately following "Vignette III" through "Vignette V" bear similar markers, but her playing on these dark-hued improvisations expresses, at times, greater energy. With her soft touch and allowance of notes to decay into silence possessing its own understated power, even the slightest increase in dynamic becomes vividly dramatic.

Norwegian trumpeter Arve Henriksen, who possesses his own distinctive brand of melodism on albums including Strjon (Rune Grammofon, 2007), contributes "Stilleweg," a simple sketch of a tune that revolves around a discreet ostinato and modest, folkloric melody that Crispell manages to explore at great length. One of Vignette's more buoyant and bright tracks, it's an emotional contrast to the album's closer, "Little Song for My Father," a tranquil lullaby that proves nuanced interpretation to have equal weight as the more overt variety.

Even when she's at her most abstract on the opening "Vignette I," Crispell retains an emotional resonance that may draw in even the most free improv-averse listener. And while only "Gathering Light" matches the optimism of "Stilleweg," the largely introspective Vignettes never descends into meandering navel-gazing. And, with her loose reference to conventional jazz harmony and structure on "Time Past," Crispell maintains that the tradition is a part of who she is but, with thirty years in jazz and improvised music, her music represents an evolving summation and confluence of her entire breadth of experience.

Unerringly beautiful, Vignettes may be Crispell's most accessible recording to date. Still, with its innate lack of compromise, it's another compelling addition to a growing discography from the fearlessly open-minded Crispell that reveals new facets with each successive release.