By MARK CORROTO
August 1, 2001
Sign in to view read count 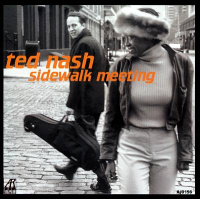 Worlds collide. It’s the 21st century and it is expected for worlds of music to collide, especially in jazz. The music originated at the collusion of cultures down New Orleans way and today’s references to classical, klezmer, Balkan, and African music goes down hardly noticed by the listening public. Ted Nash’s band Odeon, like Dave Douglas’ Charms of the Night Sky outfit, utilize a strong accordion sound to mix musical cultures.

Nash, a member of the Lincoln Center Jazz Orchestra, arranged this unique blend of music and instrumentation. His bass clarinet winds around the plunger trombone of Wycliffe Gordon, Miri Ben-Ari’s violin and William Schimmel’s accordion throughout. They open with Debussy mined from New Orleans by way of an Argentinean tango (read swinging). Nash whets your appetite for the possibilities of this band, then delivers with individual examples like a Crescent City inspired “Jump Line,” the Argentina “Tango Sierra,” and the Middle Eastern “Amad."

Lest we forget, these are jazz musicians. Switch-hitting drummers Matt Wilson and Jeff Ballard exercise varying dynamics of rhythm and swing to keep the music light-hearted. William Schimmel’s accordian doubles as a piano, synthesizer, and string-section. He takes you easily from South America to Eastern Europe and of course New Orleans.

Wycliffe Gordon doubles on tuba and trombone, but his distinguished guttural plunger work threatens to steal the limelight here. He opens the title track with his shouting ‘bone followed by a melancholy ceremonial stroll with Nash’s clarinet. Both are joined by violinist Israeli-born Miri Ben-Ari to bring the music around to, perhaps Ireland(?). While they are at it, they take on Thelonious Monk’s “Bemsha Swing” with tenor/tuba/drums. It’s Monk straight out of a parade march, infectiously wry danceable music. It works, as does all the music on this fine recording.