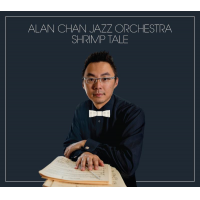 Big bands these days are being taken in many directions, one of which is eastward. Alan Chan, born and raised in Hong Kong and educated in part in the U.S. (at the universities of Miami and Southern California), has deftly blended Asian tradition with American jazz on Shrimp Tale, the splendid debut recording by his three-year-old Los Angeles-based orchestra. Growing up in Hong Kong, Chan says, he was exposed mainly to classical and Chinese folk music, from which he drew his early inspiration. It was while studying classical composition at USC that he met and was encouraged by faculty members Shelly Berg and Vince Mendoza to consider jazz as a possible avenue for his talents. In 2008, Chan became a member of the BMI Jazz Composers Workshop in New York, where he honed his composing skills under the tutelage of Jim McNeely and others. The result is Shrimp Tale, whose title recalls Chan's time in Miami studying jazz arranging with Gary Lindsay.

That's as good a place as any to start, as "Shrimp Tale," an irresistible theme set to a saucy salsa beat, not only ushers in the high-flying trumpet of guest soloist Wayne Bergeron but affirms Chan's status as a world-class composer / arranger who employs effectively every voice at his disposal, from piccolo, flute, clarinet and banjo to spoken narration (Lauren Marks, "Monte Alban," "Solita") and even a children's chorus (Darla and Zane Driskill, "Rancho Calaveras"). Elsewhere, the mood ranges from light-hearted ("Tsu Zu Ku," which in Japanese means "to be continued") to emphatic ("Moving to a New Capital") and decisive ("Rene's Barcarolle"), each of which exemplifies Chan's inclusive perspective.

The picturesque "Monte Alban" and sunny "Solita" pay homage to poet / artist Elaine Cohen, whose verses, spoken by Marks, are nestled beneath the wide canopy of Chan's genial music, while the "children's chorus" serves to further energize the lively hoedown-leaning finale, "Rancho Calaveras," whose instrumental soloists are clarinetist Vince Trombetta, trumpeter Michael Stever and guitarist Andrew Synowiec (on banjo). Aside from that trio and Bergeron, articulate spokesmen who lend voice to the enterprise include saxophonists Kevin Garren, Jeff Driskill, Tom Luer and Ken Fisher, trombonists Paul Young and Andy Martin, pianist Andy Langham and drummer Jamey Tate. The ensemble, for its part, is letter-perfect, as one would expect from a squadron of southern California's most accomplished musicians.

Even though there are occasional glimpses of the Far East on Shrimp Tale, Chan never dwells there for more than a moment or two, preferring instead to focus his energy and compositional skills on time-honored American jazz. In doing so, he has produced an album that should gladden almost anyone's taste.