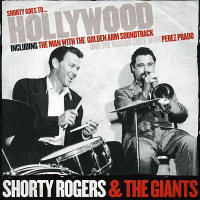 This is volume three in an ongoing series devoted to the music of trumpeter Shorty Rogers, released by Giant Steps. The temptation to say that what's on this set is unlikely to win any new converts to his music is great, but while it might be apposite the case is a little more complicated than that.

The quintet that Rogers led with reedman Jimmy Giuffre in the front line is arguably the best band he ever led, and its music makes up the first of the two discs in this set. From the outset it's clear this was a group which enjoyed an unusual degree of empathy. "Joycycle finds Rogers and Giuffre using their stylistic differences in service of profoundly musical ends, and in a manner that (in an odd way) is a West Coast equivalent to the partnership of Donald Byrd and Pepper Adams.

However, that equivalency simply doesn't come into the reckoning on their quasi-formal reading of "Isn't It Romantic?," where the two men spin out lines prior to the initial theme statement in a way that sounds anything but contrived. Giuffre's baritone solo is a model of admirable economy, and his choice of notes is shaded by the lyrical melancholy that has always been an integral part of his work. By contrast Rogers here comes on like Miles Davis, without that man's ever-fascinating restlessness, imbuing his own lyricism with a buoyant, upbeat quality.

In a very palpable sense the intro to "Martians Go Home is a measure of the influence of Count Basie on Rogers' music, although Giuffre's woozy clarinet would scarcely have been audible in the midst of that joyous powerhouse. The inimitable Pee Wee Russell may have influenced Giuffre's clarinet playing, and here that contention shows its substance. Speaking of inimitable, Shelly Manne does his thing on drums here in a manner that gives the music an airy, spacious quality it might not have had in lesser hands.

The second of these discs is largely given over to Rogers' soundtrack for the film "The Man With The Golden Arm and it's at this point that the whole collection is seriously unraveled. No less than eleven of the fourteen tracks are given over to it, and it's questionable whether or not any of it manages to get the better of the setting. In short, without the visual stimulus the film might provide, the music by itself comes across as no more than a standard bag of routine writing for big band and strings.

Finally, the twenty-three minutes of the "The Voodoo Suite performed by the Perez Prado Orchestra with Rogers as a guest is so much period exotica, and the music doesn't even have the residual appeal of Martin Denny's similar work.

All in all, this is the most mixed of bags.