BY JACK BOWERS
September 6, 2015
Sign in to view read count 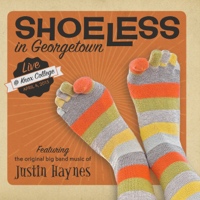 Shoeless in Georgetown (there's a story there, but that's for another time) was recorded in April 2015 before an enthusiastic audience at Knox College in Galesburg, IL. The leader of the band is Justin Haynes. What is known is that Haynes, who holds a masters degree in Jazz Composition, teaches (music, of course) at schools in nearby Lewistown, and is a more than capable big-band composer / arranger (he wrote eight of the dozen selections on this tasteful debut album and arranged all of them). He also leads an admirable ensemble whose first-rate section leaders are trumpeter Brad Goode, alto saxophonist Chip McNeill and trombonist Scott Garlock.

As an arranger, Haynes touches a number of bases, from straight-ahead to funky, blues to ballads, and even a touch of New Orleans-style swing ("Jelly Roll Meets James," a feature for the trombone section). His snappy arrangement of "There Will Always Be Another You" (on which the word "Always" replaces "Never") is an explicit highlight, as is the trumpet solo by David Hoffman (who is showcased later on the ballad "All I Need Is You"). The four exceptions to Haynes' originals are John Coltrane's "Giant Steps," Stephen Foster's "Gentle Annie" (featuring trombonist Garlock), Stevie Wonder's "Isn't She Lovely" (Larry Harms, tenor) and an abbreviated "bonus" track, Randy Brecker's zestful "Some Skunk Funk," joined in progress and enfolding heated solos by McNeill and Goode before abruptly fading out.

"Shoeless," a groovy throwback to the bop era, leads things off while introducing the earnest solo sorties of tenor Michael Kennedy Jr. Harms and drummer Tom Marko share the honors on the shuffling "Mean Mr. Marvin," after which McNeill and pianist Michael Stryker strike a proper balance on the laid-back blues, "If You're Lyin.'" Kennedy, McNeill, Harms, baritone Toby Thomas and alto Aaron Kippola are front and center on "Giant Steps," trombonist David Fletcher on the hard-rocking "Atrocity." Another blues, this one a more upbeat lament "For Barksdale," incorporates effective solos by Stryker, guitarist George Turner, bass trombonist Reggie Chapman and trumpeters Todd Kelly and John Cooper.

How Haynes managed to locate and assemble such a stellar lineup of musicians in rural Illinois is anyone's guess, but the fact that he has is undeniable. Shoeless in Georgetown is a better-than-average big-band performance, sound quality for a concert is more than satisfactory, and if value for the dollar is a concern, the album's playing time is seventy-nine minutes. A win-win for the listener.

Shoeless in Georgetown; Mean Mr. Marvin; If You’re Lyin’; Giant Steps; Gentle Annie; There Will Always Be Another You; Atrocity; Blues for Barksdale; All I Need Is You; Jelly Roll Meets James; Isn’t She Lovely; Some Skunk Funk (bonus track).