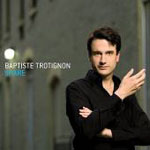 At first blush, one thought and just one thought rattles around in the mind: "Can Bill Evans never rest in peace?" But then the music of "Samsara," the second track on the lovely Share wafts into the inner ear.

With flugelhornist Tom Harrell and Mark Turner wailing on tenor saxophone, Share's main protagonist, Baptiste Trotignon, plays rapid trills beforesettling down and applying a remarkable dynamic to his piano solo. Withdrawing the emotion of the song into a virtual Buddhist meditation, Trotignon forever stamps it with the unique character that he brings—not just to his pianism, but also to the songs he writes and performs.

At first the whole idea of Share is not entirely clear, but as the music progresses on the record it begins to become eminently clear. The music is not composed on this record—not created so much as channeled by the musicians as if it were a force that came from another dimension. It is the spirit of sound that flows through the musicians in an attempt to capture and "share" something truly wondrous.

This is why it raises the spirit of famous ghosts: Maurice Ravel and Claude Debussy, in "Mon Ange" and "Peace," and Bill Evans in "First Song." But then there are some surprises as well. "Dexter," somewhat obliquely a doffing of the proverbial hat to Dexter Gordon with its boppish structure and Turner's tantalizing solo, is so full of history and contemporary splash, with Trotignon even channeling Bud Powell—just, it seems, for some fun and devastatingly brilliant effect.

The concept of Share is also evident in the interplay of the musicians. Bassist Matt Penman is a mainstay who acts as sublime harmonic colorist, no matter what the music calls him to be—accompanist or solo voice. Percussionists Eric Harland and Otis Brown III create subtle shifts in timbre and rhythmic texture that enable Trotignon to develop the music as if it were a moving, evolving entity.

And then there is the magnificent Harrell, who appears to find the heart of the song each time he is called upon to play. It is almost as if he has an umbilical connection with the melodic narrative and the labyrinthine harmonic twists and turns. Turner is no less of a symbiotic element in the music, gushing majestically on "Flow" and, in many ways, defining Trotignon's soon-to-follow solo.

So...this is no Bill Evans come to life, but brave new angles on a slew of pianists and musicians, ranging from Ravel and Debussy—Rachmaninoff, even—to, of course, Herbie Hancock and Evans. But principally it is Baptiste Trotignon, a musician with the promise of great things to come.