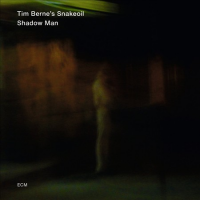 New York-based alto saxophonist Tim Berne has long been regarded one of the Downtown scene's most forward-thinking bandleaders. Among his peers, no other artist has so often fostered the creative talent of subsequent generations; multi-instrumentalist Chris Speed, keyboardist Craig Taborn and drummer Jim Black all spent their formative years playing alongside the veteran saxophonist. Likewise, Berne recently recruited rising multi-instrumentalist Oscar Noriega, pianist Matt Mitchell and drummer Ches Smith as members of his latest project, Snakeoil.

Shadow Man is the sophomore follow-up to the multi-generational quartet's critically acclaimed self-titled 2012 ECM debut, signifying the first time the esteemed leader has been signed to a major label since his late 1980's tenure with Columbia Records. Recorded by David Torn, this intimate session expertly captures the group's boisterous live sound in a sonically pristine studio environment. Where the previous date demonstrated Berne and company's capacity for subtlety and restraint, this set offers a more representative example of the unit's vast dynamic range.

Returning to long-form methodologies, Shadow Man features a trio of episodic compositions that each exceed a quarter of an hour, although the record does open with a handful of relatively concise numbers. The ascending melodic contours of "Son Of Not So Sure," are keenly accentuated by Smith's scintillating vibraphone, while the leader's searing altissimo provides a cathartic climax to the jittery rhythms of "Static," with an understated cover of Paul Motian's "Psalm" spotlighting Berne and Mitchell's lyrical rapport. The three remaining tunes unveil a dizzying array of asymmetrical melodies, contrapuntal harmonies and modulating rhythms, culminating in "Cornered (Duck)," which progressively builds from introspective impressionism to a rousing finale.

Throughout the session, Noriega's serpentine clarinets complement Berne's acerbic alto perfectly, as demonstrated by the frenzied interplay of "Static." Even apart their aesthetic congruity is uncanny; Noriega's bristling cadences at the apex of "Socket" and Berne's multiphonic trills during the coda of "OC/DC" are equally impassioned. Mitchell's adroit pianism continues to provide an expansive harmonic foundation for the band, augmenting the proceedings with myriad timbres that yield swirling kaleidoscopic textures when combined with Smith's effervescent vibraphone musings and percolating conga accents.