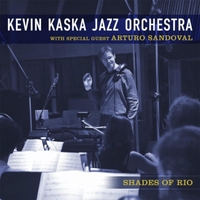 Seductive melodies and danceable rhythms carry the day on Shades of Rio, a tasteful debut recording by the southern California-based Kevin Kaska Jazz Orchestra, which earns the name by using a full string section on most numbers to complement its well-upholstered twenty-three member core ensemble anchored by master drummer Harvey Mason. Kaska, a story unto himself, wrote eight numbers and all the arrangements, many with a Latin flavor, thus playing to the strength of special guest Arturo Sandoval, a nine-time Grammy Award winner whose burnished trumpet is front and center on five of the album's eleven tracks.

Kaska, who honed his composing / arranging skills at the Berklee School of Music, was invited in 1997 by none other than John Williams to compose for the Boston Pops a twenty-minute work for narrator and orchestra, The Wizard of Menlo Park, marking the one hundred-fiftieth anniversary of Thomas Edison's birth. Later, he was commissioned to write the Boston Symphony Orchestra's enthusiastically received 2000 Fanfare. A documentary of Kaska's work, Eroica! has been broadcast on PBS, and he even has an entry in the Guinness Book of World Records for a composition commissioned by the World Harp Congress using the world's largest harp ensemble, 232 in all.

Having dissected Kaska's credentials, what of the music itself? While much of it is lyrical and more or less even-tempered ("elevator music," as a close companion remarked), it must be appraised here on the basis of its jazz quotient, which is generally quite strong. In other words, there is no rule that says jazz can't be pretty as well as creative. Yes, there are some truly lovely melodies on the album, and yes, strings are often on hand to amplify the experience (as they are with the Netherlands Metropole Orchestra), but the strings are counterbalanced by Sandoval's luminous solos as well as persuasive statements by Dan Higgins (alto and soprano saxophones, flute), pianist / organist Mike Lang and others. Sandoval is especially assertive on Kaska's down-home "Gospel of Truth," wherein he duels with Higgins, Lang (on Hammond B3), vibraphonist Nick Mancini and trombonist Scott Whitfield.

Sandoval has his own feature ("Tenderly"), as do Higgins ("Elegy for John Barry") and Lang ("True to the End," on which he is accompanied only by bassist Mike Valerio). Sandoval, Higgins (alto), Mancini and trombonist Bob McChesney shine brightly on the sunlit opener, "Spy on the Wall," Sandoval, Lang (B3) and Higgins on the tantalizing "Baile Sauve." Higgins and Lang (piano) trade volleys on the graceful and well-named "Samba de Higgins," Antonio Carlos Jobim's lilting "So Danco Samba" and (with guitarist Carl Doering) Kaska's picturesque "Serenade from Rio." Lang, Higgins (soprano), Mancini and Doering return to help spruce up the expressive finale, "Carnivale."

Say what you will about beauty, it definitely has a place in jazz; and if it swings, so much the better. On Shades of Rio, Kevin Kaska and his exemplary orchestra examine both sides of that coin, which more often than not lands heads-up and shining brightly.