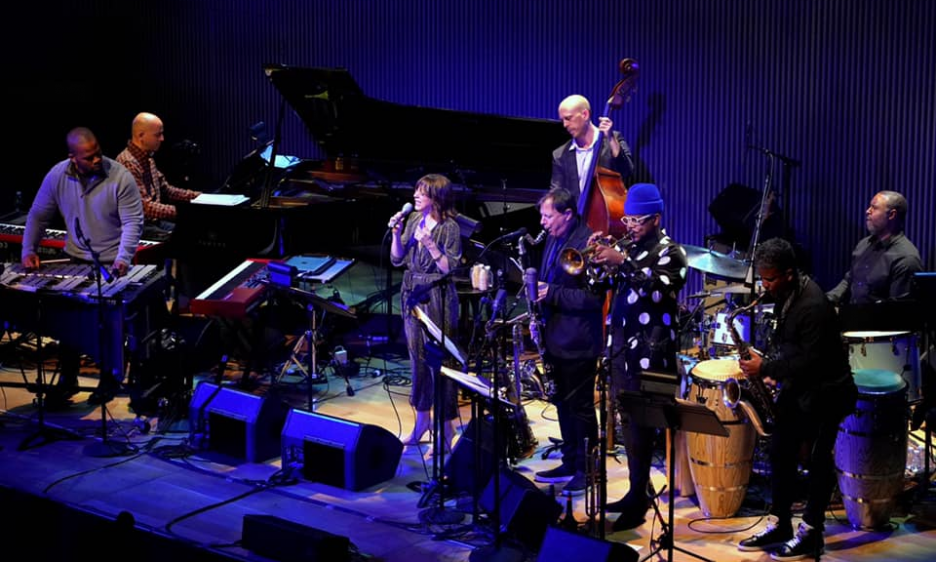 Established by SFJAZZ, the San Francisco music-presentation nonprofit which hosts most events at its own San Francisco edifice, the SFJAZZ Collective, a group of established jazz musicians, has been making annual tours including material from one modern jazz great (such as Miles Davis or Herbie Hancock) as well as individual compositions penned by band members, all of whom are composers and arrangers. Every tour is recorded, and a limited-edition CD set is released of the shows. This one was recorded for posterity as well. As a response to the pandemic, this year the ensemble chose to present original compositions in tandem with socially relevant songs which have become standards.

Abbey Lincoln's hopeful "Throw it away," next up, featured bassist Brewer and a solo by Etienne Charles followed by one from another fluent exercise from Potter.

"And keep your hand wide open Let the sun shine through 'cause you can never lose a thing If it belongs to you," sang Parlato.

Pianist Simon then introduced "8'46," an eloquent new composition which is exactly 8 minutes and 46 seconds long, corresponding with the exact interval in which Minneapolis police officer Derek Chauvin knelt on George Floyd's neck to execute him. With this composition, Simon intends to spread awareness of this brutal act, as well as the nation's chronic problems with police brutality. Parlato and McCoy added vocal tonalities, and the piece also featured Charles on trumpet and flugelhorn.

McCoy then led the charge into a rollicking version of Marvin Gaye's classic "What's Going On" which featured punctuation by Charles; then Sánchez leapt into a solo while Brewer and Scott held down the backbeat; Wolf's vibraphone added eloquence, as Charles responded to the musical flow.

Octavia Butler's 1993 apocalyptic science fiction novel Parable of the Sower which takes place in a dystopian 2024— provided the inspiration for the tune "The Sower" which featured the vocalists harmonizing with the horns.

Sánchez spoke of the plight of marginalized Afro communities (which exist in Puerto Rico, Colombia, Honduras, Brazil and elsewhere) while introducing his dynamic composition "Ay Bendito" which featured blazing playing by Sánchez and Potter. The band devolved to a quartet before the other players re-entered to conclude.

With a heartfelt "Happy Halloween," Potter introduced his composition "Can You See/Mutuality." Vibes and drums offered percussive accents while as well as lyrical flute from Potter, harmonies from butterfly-caped Parlato, a duet between Potter and Kendrick and a solo from Charles near its conclusion.

Next up, Wolf's "All There Inside" featured vocals from, a vibraphone solo from Wolf, "Already Died For Her" again offered vocals from Parlato ("Don't you see where my heart has died"), Charles on flugelhorn and trumpet, Potter on bass clarinet, and Brewer on electric bass.

A standing ovation followed. The band exited and returned for "Unity"—a song which would not be out of place in a Sun Ra Arkestra set—which featured vocals by McCoy, another vibraphone solo, stressed "unity and strength" and brought the evening to a conclusion.