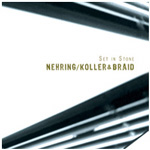 On Set in Stone, Lorne Nehring, George Koller, and David Braid pay tribute to Fred Stone, a musician and educator who was the first Canadian in Duke Ellington's band. And while that is an achievement in itself, Stone did much more with his calling. He played the piano, the flugelhorn, and the trumpet and experimented with an amplified horn and a synthesiser in the sixties. As a composer, he wrote for small groups and big bands, later giving up formal notation for a more spontaneous interaction with his band. There were several conglomerates under his leadership including one with Koller, who played with him in the '80s.

The diversity that Stone injected into his writing is seen in vivid detail on the music this trio chose to record. What makes it all the more enjoyable and keeps it ticking and relevant is the artistry of, and the interplay between, the three musicians. They have been playing together for five years, which helps account for the empathic ears, but each brings an approach that steers clear of the expected.

On the introductory "D Minor Waltz Braid plays piano with a crisp air; his notes are the joy of sound, clear and magical. He darts on to the plain of invention and lets daring and unusual ideas gush in a fount, but the torrent neither overwhelms nor stifles. Nehring's drumming sets a sturdy base, yet it's still pliant. And with Koller etching the landscape with crisp bass accents, this is a killer track.

"Titled-Untitled has a freer rein, the strings of the piano and the strings of the bass engaging in percussive conversation. The snares beat in tandem with the piano, the bass bowed and plucked, setting up shifting rhythms. The motifs change shape and hue, and the pulse steadies itself in the unexpected, stretching and loosening tension. Interest is kept taut to the last note of Braid's arc.

The vista opens wide on "Set In Stone and the band fills it with inspired imagery. Koller bows with skitterish fervour and Nehring ignites vibrant splashes on the cymbals, a rustle that seeps into the spaces of Braid's piano. When the piece evolves into form, melody takes hold as the trio is locked in a heady musical embrace.