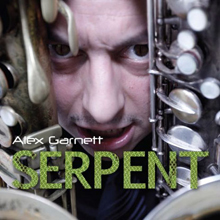 The Alex Garnett who peers out of the cover of Serpent looks a little aggressive and wil0- eyed, with odd vertical slits where his pupils should be—a serpent indeed. The Garnett on the inside is more benign, but with a contemporary hipness. In the excellent black and white back cover photo, the besuited saxophonist is cool and focused, the stylish bopper who could easily have been photographed on a 52nd street club stage in the '50s. When he plays, Garnett reveals himself to be all three men: wild, hip and cool in turn.

The British alto and tenor saxophonist has been a professional player for 20 years, a first-call sideman for artists as diverse as Scott Hamilton, Wynton Marsalis and Van Morrison and a regular member of the Ronnie Scott's All Stars. Serpent is his recording debut as leader: a straight-ahead session strongly infused with the blues. Recorded in one day in 2009 at Systems Two in Brooklyn, this all-originals session impresses on numerous levels, including the quality of Garnett's writing, the playing skills of the individual musciians and the way in which they lock in together as a unit despite relatively little rehearsal (a deliberate strategy on Garnett's part).

Serpent features two slow but contrasting tunes: "Three For A Moor" is a warm and inviting ballad; and "Dracula's Lullaby," as befits its title, has more of a noir-ish feel—thanks, especially, to Wonsey's sparse chordal work and Janisch's bass solo. More upbeat tunes, like the catchy "Blueprint," which features a surprisingly funky arco solo from Janisch, and the slinky, Latin sound of "The Pimp," swing from the first note. "Saluda Hakim" is a tribute to Charlie Parker, a swinging bop composition with an irresistible hook and fine solos from every musician, while "Atonement" is Garnett's smoothly flowing take on "When The Saints Go Marching In."

Serpent's title is a reference to a precursor of the saxophone, and recognition of the inventiveness of Adolphe Sax. It's the musicians' inventiveness that stands out on the album, however, a belated but emphatic debut for Garnett as bandleader.