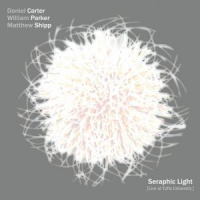 Do you remember the film The Thomas Crowne Affair? The original—not the 1999 remake—starred Steve McQueen and Faye Dunaway, and contained the 1968 Academy Award-winning song "Windmills of Your Mind" by Dusty Springfield. I bring that up because this live performance by Daniel Carter, William Parker, and Matthew Shipp brings to mind the lyrics: "Like a circle in a spiral, like a wheel within a wheel / Never ending or beginning on an ever spinning reel / As the images unwind, like the circles that you find / In the windmills of your mind."

In 2017, Carter, Parker, and Shipp were invited to Tufts University in Boston for the event "Art, Race, And Politics in America." They participated in a forty-five-minute talk and Q&A after the screening of the 1959 documentary The Cry Of Jazz. Knowing the pianist's public opposition to the current Administration, it certainly would have made for some lively discussion.

The trio did, though, settle into a remarkable three-part, long-form, collective improvisation, unwrapping a circle in a spiral, a wheel within a wheel. While the three musicians have worked together (generally with a drummer involved), this is their first recording as a trio. The music relaxes in this setting without easing up. It is as if the trio agreed to gently unpack the night's forum over the course of their fifty-six-minute performance.

While adventurous listeners are quite familiar with the music of Parker and Shipp, special note must be taken of multi-instrumentalist Daniel Carter. Wielding the flute, trumpet, clarinet, and three different saxophones, he even further probes this elaborate celestial hierarchy of sound. The closest comparison to Carter here might be the saxophonist/trumpeter Joe McPhee. The entire set is delivered in the most patient manner, eschewing lengthy solos for group improvisation and interaction. Shipp is arguably at the height of his career, and Parker is the eternal timekeeper for all things in the creative improvisation world. This is one recording not to be missed.