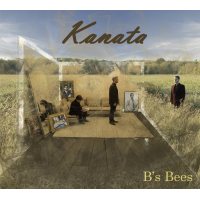 B's Bees, from Montreal, Canada, led by drummer Brandon Goodwin, are a class act, a beacon of hope for the future of jazz.

Kanata, title of their third album, is the Iroquois Indian word for "village," from which derives Canada. The first four numbers make up the "Kanata Suite," a powerful statement of intent by Goodwin. He calls it "a reminder of our history and of the moments that shaped our country." The suite opens with Goodwin's drumming, then the rest of the band comes in playing chords until Sandiford takes over on guitar, followed by Japanese reed man Masashi Usui and "Killer" Joe Ferracuti's Mal Waldron-influenced piano. The piece goes on a bit too long and becomes a tad too clever for its own good before Alec Safy's bowed bass finally puts it to bed.

The haunting "Syrian Lullaby," inspired in equal measure by that country's civil war and the revolutionary thoughts of late bassist Charlie Haden, is the stand-out track on the album, with Sandiford in particular playing beautifully. Usui ably demonstrates on "Pipeline Blues" that less is more, while Goodwin's drumming takes on an understated, almost martial ferocity. In contrast, "Liberté," a song of freedom, has a surprisingly sad tinge to it.

From the Monkish "Nothing Yet" onwards, the album is devoted to compositions by Sandiford and Ferracuti. Goodwin sees them as his "musical brothers," so the changeover is pretty seamless, the good of the band put firmly before flashy demonstrations of individual brilliance.

Kanata Suite i; Syrian Lullaby; Pipeline Blues; Liberté; Nothing Yet; Refuge; Atomic Future; For Or Against.