Outhead: Send This Sound To The King

By GLENN ASTARITA
December 26, 2014
Sign in to view read count 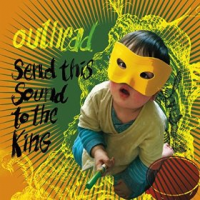 This San Francisco Bay-area unit propels a renegade New York downtown-ish vibe amid notions of punk jazz and the occasional flight towards the free zone. They also rock hard as guest guitarist Pete Galub inserts a serrated edge with his avant, jazz fusion vernacular. Nonetheless, they're young artists with big ideas. Besides the instrumentalists notable chops, it's the memorable compositions that segregate the band from many of its peers. Featuring guest vocalists who help proliferate a melodic Indie rock groove on the final track "Uncle Ho," the production contains a heterogeneous mix, fundamentally centered on a progressive jazz-centered stream of consciousness.

Indeed, the musicians generate good cheer via these largely up-tempo works; although, on "The Chairman," Galub imparts some steely toned angst with his howling, electrified licks in parallel with saxophonists, Alex Weiss and Charlie Gurke's undulating impetus over a medium-tempo cadence. Each piece poses distinct stylistic components as the band projects an entrepreneurial mindset, witnessed on the asynchronous pulse that encapsulates "Glass Houses & Gift Horses," where the saxophonists blustery and soulful unison phrasings segue to a blitzing 4/4 groove and fractured lines. Ultimately, they stitch a complex but attainable storyline together, leading to a rather ominous downward spiral.

Diversity is a key driver, evidenced by the spoken word piece "A Made Truth," shaped by bassist Rob Woodcock's prominent ostinato motif and Galub's spooky lines, intermixed with a drifting melody. And from an improvisational perspective, the saxophonists don't rely on one primary mode of attack, as they integrate impassioned treks into the red zone during choice movements. Simply put, this album marks one of those unforeseen surprises that arrived in the mail. Hopefully, the musicians will pool their creative resources for subsequent endeavors of this ilk or to extend matters into other regions of sound and scope.

Ode to John Denver or How I Learned to Stop Worrying about Death; The Chairman; The Palimpsest; Glass Houses & Gift Horses; A Made Truth; Trotsky; Uncle Ho.

Title: Send This Sound To The King | Year Released: 2014 | Record Label: Self Produced