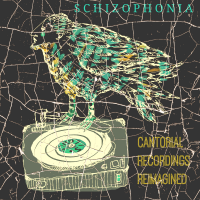 What makes Schizophonia: Cantorial Recordings Reimagined special is what initially made me shy away from it a bit: it's Fruchter's debut as a vocalist. Yet, the source of the album's charm and emotional impact is, in fact, the earnest, directly heartfelt nature of Fruchter's singing. His voice isn't real high in the mix; he's frequently overwhelmed by a phalanx of analog keys and his own guitar. Elsewhere, Fruchter's live vocals are electronically processed, as are the samples of genuine Cantorial singing that constitute the conceptual backbone of Schizophonia. In the end, the way in which Fruchter incorporates various vocal elements really heightens the intensely mystical, ritualistic sensibility of his music.

Musically, Schizophonia is a logical next step from Fruchter's previous aggregation, Pitom, which also featured ace bassist Shanir Blumenkranz. On the surface, Fruchter's music is closer to adventurous progressive rock and old school metal-think Led Zeppelin circa Presence (Atlantic Records, 1976), early Black Sabbath, and Bill Bruford-era King Crimson. The advance press compares Schizophonia to Radiohead, but I don't hear that at all.

Fruchter's pieces are unapologetically anthemic and hooky in the best ways, and the band conveys them with a relentless, almost theatrical, energy that seems closer allied to the best jazz-rock and progressive rock of the 70s. The instrumental "Brich Shmeh" sounds surprisingly like a lost Frank Zappa piece. Brian Marsalla 's Hammond B-3 solo on "Wehoser Soton" is straight out of the 70s Prog Rock playbook. Elsewhere, Marsalla and Fruchter indulge in the sort of extended improvisational jamming that Zorn's Electric Masada does so well. Fruchter's music tends to be very dense and textural, with a lot going on in the background. So when the band backs off a bit, as on the haunting "Hineni," and the gorgeous North African-flavored blues "B'Rosh Hashanoh," the effect is completely riveting. So too is Fruchter's solo guitar feature "Shir Hamolos," which echoes Albert Ayler's "Ghosts" in a very personal way.

Not surprisingly, the creation of Schizophonia is deeply tied up in Fruchter's personal history. His grandfather, a rabbi based in Memphis, Tennessee, was a devoted fan of Jewish cantorial recordings. Fruchter has long been interested in re-interpreting these devotional songs and sounds, and if the outcome on Schizophonia is any indication, I-for one-would be greatly interested in hearing the next chapter.