Maximize your visibility at All About Jazz by upgrading your musician page from standard to premium. With it, you'll receive All About Jazz home page exposure, a highly stylized / ad-free musician page with bonus features and benefits, an ad, plus you control where you sell your music and so much more.
Learn More
375

BY KURT GOTTSCHALK
April 11, 2010
Sign in to view read count 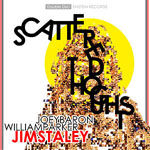 Jim Staley's career has been either made by or hastened by (or more likely both) his work as a producer and promoter. He rarely performs outside of Roulette, the longstanding Downtown venue he oversees and appears there only a few times a year at best. His recorded output is largely limited to occasional releases on Einstein Records, the label run as a part of Roulette Intermedium. His work keeping Roulette afloat through four decades of changing landscapes in new music is to be championed, even if it means fewer people know him as one of the city's finest improvisers than otherwise might.

Staley excels at the duo, as evidenced by his longstanding partnership with Ikue Mori, and on the double CD Scattered Thoughts is heard in two excellent and very different, pairings. The first disc is an intriguing, long-form composition by bassist William Parker, performed with a prerecorded soundscape that collages disembodied voices (spoken and singing) against fragments of music and other floating sounds. Parker's large-scale works have an unusual way of suggesting linearity without quite executing it and "Six Minutes Dancing in the Fog" seems to be a global perspective on the making of music. Parker may be less of a storyteller than he is a storythinker, but his skeletal frameworks still make for interesting structures. The playing here is mostly subdued, an unusual realm for Staley, who comes out of the quick-change school of the early Downtown days. Parker, likewise, is more of a passing presence here than he is in the anchoring he has provided for so many free jazz groupings. The world of abstract music doesn't demand literal readings and the melding of duo and ghostly other here is striking.

The second disc is a more typical situation in which to find Staley: a series of improvisations with an equally quick-witted partner and longtime associate. Drummer Joey Baron has been a fixture of many significant New York groups (most popularly John Zorn's Naked City and Masada, but also Bill Frisell's long-lived trio with bassist Kermit Driscoll and an array of other assemblages) and is an enthusiastically responsive player. Even hearing his handiwork on record (sometimes quite literally, as he is given to setting the sticks aside) is a blissful experience. It's a great pairing for Staley, whose arsenal of mutes are the mechanics of his unpredictable twists and turns. Each player also takes one piece unaccompanied, adding to the richness of the communication. There is an exciting sense while listening that anything can happen—and once it's over that perhaps everything did.

The two sets are different enough that they deserve to be separated and presumably that was the thinking behind releasing this as a double disc, even though the 77 minutes would have fit on a single CD. Einstein's pricing, however, matches the playing time, not the disc count. Housed in a bright digipack with cover art evoking Chuck Close, it's a fine reminder of what a rare, if omnipresent, gem Jim Staley is.