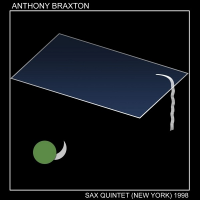 Saxophone agglomerations are not without precedent in reedman/composer Anthony Braxton's copious playbook. Indeed, his "Composition 37" for four saxophones on New York, Fall 1974 (Arista, 1975) could be said to have launched the genre, bringing together as it did three of the founder members of the pioneering World Saxophone Quartet two years before their eventual formation. What is perhaps even more remarkable about Sax Quintet (New York) 1998 is that the single piece performed, "Composition 173," was originally scored for a different instrumentation entirely (four actors, two soloists and ensemble, as documented on Composition 173 (Black Saint, 1996)), although you would never know it from this spirited rendition. In fact this live recording from the Knitting Factory was part of a six set concert series which featured the same chart being interpreted by changing combinations on each occasion. The set constitutes one of a growing download only series on the saxophonist's New Braxton House label.

Joining Braxton on a veritable saxophone showroom of instruments are four regular collaborators from this period in Chris Jonas, Seth Misterka, James Fei and Jackson Moore. Though not one of Braxton's Ghost Trance Music pieces, distinct similarities occur, in the close knit unisons, periodic departures from the line, and the relative independence allowed to the protagonists within the overall framework. Perhaps the main difference is the lack of the insistent streams of eighth notes which characterize the pieces on, say, Tentet (Wesleyan) 1999 (New Braxton House, 2012). While impossible to distinguish individual contributions, except for the leader's distinctive roller coaster dash, it goes without saying that the instrumental prowess of the participants is stellar and their familiarity with Braxton's methods leads to a thoroughly convincing performance which breathes unruly life into what might otherwise seem academic systems.

At times the complex non-repeating line, which nonetheless features recurring motifs, resembles a never-ending theme expounded in loose colloquy by five Charlie Parkers! As typical of Braxton's workings, anyone is at liberty to interpolate additional compositions from the composer's portfolio at suitable junctures in the proceedings, and echoes of recognizable themes come and go at various points. Some of the most notable are the strains of "Composition 40I"- a madcap circus march first recorded on Performance 9/1/79 (Hat Hut, 1980)- that emerges at 23.30' introduced by a pair of piping sopranos, and is then picked up and embellished with raucous honks by the other horns. Elsewhere a wonderful episode impresses at 17.00' where the horns evoke into a pack of dogs baying at the moon, while later at 36.00' an entertaining contrast of extremes ensues between a saxophone whistling in the bat squeak register and stentorian bellows from one of the larger members of the reed family.

Of course, stamina is needed to get through the unbroken 52-minute performance in one sitting, but for anyone remotely interested in Braxton's work or the art of advanced saxophone, it's a commitment well worth making.