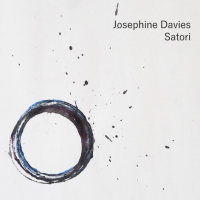 An alumnus of the Guildhall School of Music and Drama, Josephine Davies's follow-up to her 2010 Trio Records album Perspective. She is a member of the excellent London Jazz Orchestra which habitually stuns audiences with its collective virtuosity; she also composes for this big band too. She appeared on fellow LJO member Pete Hurt's landmark 2016 release A New Start. Between them, bassist Dave Whitford and drummer Paul Clarvis have large enough CVs to fill a couple of hefty articles. Suffice it to say, they prove a perfect and sensitive rhythm section for this trio. Half the album was recorded at the I'klectik arts centre near London's Waterloo and the other half was recorded live at Jazz Nursery, also located within I'klectik. Both sessions took place in mid-2016.

The opener with Davies on soprano, is the serpentine, vaguely Eastern-sounding "Insomnia," reflecting perhaps the album's title which is the Zen Buddhist word meaning spiritual enlightenment. "Something Small" takes its cue from the hypnotic meanderings of Albert Ayler. "Paradoxy" is a beguiling paean to Sonny Rollins's timeless classic "Doxy" with Davies appropriately here on tenor. "Crisp Otter" continues the punning theme since the piece's title is a salute to the great American saxophonist Chris Potter (a homophonic reference if you say it out loud in one go).

Davies shrewdly opts to save most of the audience applause until after the penultimate track "The Yips" because that way, the flow of the music is uninterrupted. The final track is a revisit of "Paradoxy" but such is its attractiveness that it's a welcome reprise. A truly gifted and imaginative saxophonist, Davies undoubtedly possesses the art of the improviser and has produced an album of exuberant lyricism and consistently engaging tunes.