By Eyal Hareuveni
October 17, 2012
Sign in to view read count 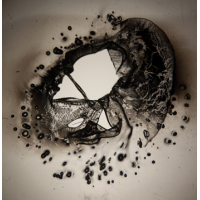 This uncompromising set of free improvisation challenges the very basic concepts of what music is. As seminal improvising guitarist Henry Kaiser writes in his illuminating liner notes: "forget about melody, harmony and rhythm for the moment and listen to everything else that you can hear going on."

And there is much going on in terms of structural, timbral, spatial and conceptual complexity in these eight non-idiomatic, on-the-spot improvisations. Houston-based Sandy Ewen experiments with the electric guitar with various enhancements and preparations, as well as contributing art work to the booklet and cover; prolific improvisers, bassist Damon Smith and percussionist Weasel Walter, add their urgent, inventive ideas. All three have highly personal approaches and extended vocabularies on their instruments: Ewen uses amplification, feedback and distortion in an organic manner; Smith has mastered extended techniques on the bass and adds alien field recordings; and Walter's restless and anarchistic rhythmic sense defies all logic.

All the improvisations disrupt any attempts at linear patterns or coherent structures. The sonic spectrum does not register as coming from regular instruments, especially Ewen's guitar and Smith's electric upright bass, and often produce sounds akin to noise. There is never obvious tension-building and tension-releasing in these improvisations; all of these hyperactive, wild abstractions assume that music asks questions, rather than providing answers. This kind of music cannot be notated in any Euro-Western musical system. Still, this trio creates arresting, otherworldly musical forms and sounds, honing its own immediate, extreme and unpredictable interplay as it expands methods of constructing and deconstructing musical ideas.

Focused and uncompromising, weird and radical yet varied, often playful and always interesting.