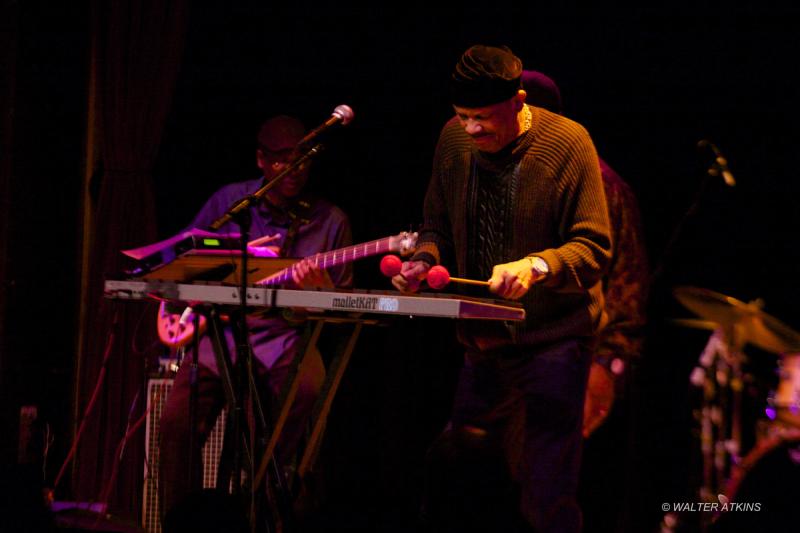 By Walter Atkins
December 12, 2015
Sign in to view read count

The influential Roy Ayers and his band provided a fantastic performance, taking his jubilant audience on a mystic voyage through his musical landscape

The venerable vibraphonist Roy Ayers and his seasoned band performed during a sold out weekend at the East Bay's popular Yoshi's in Oakland's Jack London Square. The exuberant 75-year-old composer /musician opened the exciting second show with "Sweet Tears." Ayers surprised the full house by taking his band into his arrangement of Rick James' funky number one RB hit "Give It To Me Baby" which was totally enjoyable. After finishing James' massive 1981 hit, Ayers introduced his energized band which consisted of: vocalist John Pressley, bassist Donald Nicks, keyboardist Jamal Peoples, and brother Larry Peoples on drums.

Ayer's extensive discography includes over 87 records and over 6,500 compositions. Besides his lengthy recording career, his music is ubiquitous. According to his official website, he is, "the number one vibraphonist and one of the most sampled artists in history." The impressive and long list of artists who had incorporated Ayers' samples into their songs include Bjork, Mary J. Blige, Erykah Badu, Mos Def, PM Dawn, Common, Seu Jorge and various other recording artists.

His melodic music with its strong backbeat helped form the foundation of acid jazz. Born in Los Angeles, Ayers has been based in Brooklyn New York for several years. One of the fans mentioned he had Ayers' albums Sunshine and Mystic Voyage (Polydor,1975). Another one mentioned seeing him 35 years ago in Seattle.

Ayers went into his signature song "Everybody Loves The Sunshine," the title track from his 1976 Roy Ayers Ubiquity album Everybody Loves The Sunshine (Polydor), while Pressley slowly repeated "Song to the sun." The audience responded with hands up clapping into the air. The dulcet tune featured Nicks' thumping bass providing a serious groove for Ayers melodic vibes to float over. The listeners applauded and moved to the music with contributions from the keyboardist. The spirited Friday crowd proved to be engaged throughout the second set. Many people were slowly moving in cadence to the soothing music in their seats.

Pressley talked about Ayers' available CDs including King of the Vibes (Self produced, 2011) with the track "Obama Say." He said to find out what (President) Obama said, buy the CD. He mentioned the award winning vocalist/musician and the late punk funk master Rick James collaborated on an album called Double Trouble (AIM, 2005), with a "Whole lot of funk going on." He added the highly celebrated vibraphonist would be out front at the table to sell and sign records after the concert. Pressley said, "If you want more music and to party, you need to scream," while the buoyant customers cheered and clapped loudly.

The next number was "Red, Black and Green" which featured Ayers in full command of the vibes. While the bass played, he took a stool and listened intently. The bassist strolled and teased his instrument and someone yelled, "Get it!" from the floor. He then used his hat to strum the strings and stood up halfway through the solo. With the ringing applause, the drummer played with robust encouragement from the crowd. Pressley said "Get up" and fans stood up dancing to "Running Away." The full band jumped in on "Evolution." Pressley said, "Here we go, the funk is on-don't stop!" Patrons chanted "More." The band rolled into Ayers' Billboard top ten hit "Don't Stop The Feeling" and a customer yelled "Buy me a drink."

He went into the romantic "Love Will Bring Us Back Together." During the call and response, two women were dancing at their table. Pressley chanted, "Ain't no party like a Roy Ayers party cause a Roy Ayers party don't stop." The guests merrily repeated this line and gleefully segued into chanting, "The roof, the roof is on fire..." Everyone thoroughly savored the music and the moment.

Ayers said, "I'm 75 and still here. I appreciate the fact you guys have been fantastic to me. Hope to make another hundred. Everything is still working, you know what I mean." Some one from the audience yelled, "We love you!" Ayers asked if we wanted to go on a voyage and closed with his elegant " Mystic Voyage." Ayers and his scintillating band garnered a standing ovation from the overflowing house.

The influential Roy Ayers and his band provided a fantastic performance, taking his jubilant audience on a mystic voyage through his musical landscape. With a rich musical career spanning over 50 years, the spirited King of the Vibes wears his crown well.