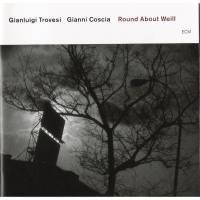 In his liner notes to this album, philosopher/novelist Umberto Eco talks about Gianluigi Trovesi and Gianni Coscia revisiting Kurt Weill "in a musical drowse dominated by an almost oneiric principle of contamination." As you do. In plain English, Eco is suggesting that Trovesi and Coscia have approached the music as if in an eclectic, stream of subconsciousness daydream, interweaving Weill's compositions with their own and those of other simpatico composers. And he's spot on. Trovesi and Coscia appear to be in deep free association mode here, employing intuition and impressionism rather than literal historical reconstruction to celebrate Weill's singular and enduring legacy.

The result is a small masterpiece, an entrancing and very beautiful celebration of Weill's late-'20s/early-'30s Kabarett and opera work, in particular his partnership with playwright Bertolt Brecht. The album was inspired by Weill and Brecht's first major collaboration, The Rise And Fall Of The City Of Mahagonny, themes from which are featured throughout. The more widely known The Beggar's Opera is referred to in only one track, "Tango Ballade." The acerbic and faux awkward lines of Weill's music are retained—how could it be otherwise?—but are suffused with a warmer, sunnier, mellifluous Mediterranean vibe brought to the sessions by Italians Trovesi and Coscia.

As Eco also observes—and his liner notes are insightful and excellent, even if you do find yourself reaching for the dictionary on occasion—some of its most quintessentially Weillian moments occur on non-Weill tracks. Trovesi and Coscia's opening "Dov'e La Citta?", for instance, is Weiller than Weill, authentically idiomatic without being a pastiche or a cliche, as are their "Improvvisamente" and two-part "Round About Weill," the second part of which morphs seamlessly into "Blue Moon." It may not sound like Weill when you read the words here, but it sure sounds like Weill on the metal—as do the duo's interpretations of Rodriguez's "La Cumparsita" and the traditional pan-European folksong "Frere Jacques" (here in its Italianate version "Tristezze Di Fra' Martino"). Altogether, Weill's compositions make up about two-thirds of the material, with Trovesi and Coscia contributing most of the rest via new compositions and through-improvisations.

Too often, accordion/clarinet pairings are jolly but slight. The levels of creative improvisation and responsive dialogue employed here would lift Round About Weill onto a higher plane even without the benefit of Weill's sublime compositions. With them, we have something substantial, provocative, and pretty irresistible.