BY MARK CORROTO
February 4, 2008
Sign in to view read count 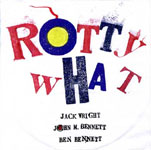 Note to my editor: do not attempt a spell check of this review, as much of the language presented on Rotty What won't be found in any modern language dictionaries.

That's the ticket here: full frontal nudity. Well, substitute spontaneous combustion for the naked parts, and you have an idea what you are in for when poet/mail artist/writer/publisher John Bennett collaborates with saxophonist Jack Wright. This self-produced CD-R documents a mini-tour and performance by the pair with John's son, Ben Bennett.

Poetry and jazz is not a new combination; Kenneth Patchen and Kenneth Rexroth began what Jack Kerouac and Michael Harper carried on. What is found here is not so much poetry accompanied by music, as nearly extemporaneous prose and instinctive musical improvisation. The elder Bennett's writing—sometimes a word salad of double-talk—relies more on sound than text for meaning. Likewise, Wright's playing is more about sound and instant creation than melody and tradition. It follows that this meeting of minds is an exercise in the creation of a new language.

Think of this as an improv trio of saxophone, percussion and voice. All three artists are capable of creating a new sonance at any time. Drummer Ben Bennett has an emerging style that's part Paul Lytton and part Gino Robair. He favors the swirl of energy over a measure of the beat. This works nicely with veteran Wright's tendency to eschew time. The pair work out a th-minute duo on the aptly titled "Jack 'n Benny that is worthy of anything Martin Davidson has released on his Emanem label. Wright seems to have the knack for finding playing partners that he can compliment to the advantage of both the musicians and, of course, listeners.

But the uniqueness of this outing is the vocalese of the poet. John Bennett bends words like a master blues man bends notes. His slide guitar of a voice teases and tortures a text until written flummadiddle relents and gives up meaning.

The trio is quite comfortable on the knife's edge, mining the outsides of poetry, jazz and sound. It's an adventure worth seeking out.