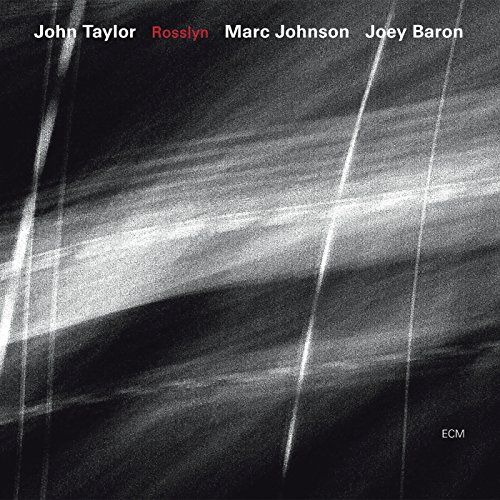 At age 61, pianist John Taylor has finally made his major label debut as a leader. But then again, Rosslyn doesn't really have a chieftain. Taylor, who has been a sideman since the 1970s, seems not to mind sharing his rostrum with his two bandmates: bassist Marc Johnson and drummer Joey Baron.

The British-born Taylor gained early recognition with John Surman, before becoming the house pianist at Ronnie Scott's club. Critical acclaim came with the group Azimuth (with Kenny Wheeler and Norma Winstone) who applied minimal or pulse music to improvisation. Last decade he sat in as the anchor for Peter Erskine's trio with bassist Palle Danielsson.

This trio, originally named John Taylor's New York Trio five years ago, gets together whenever the three musicians find themselves in the same city. Its trinity, an equilateral triangle, is a stasis of beauty. Taylor plus Marc Johnson, the great Bill Evans' last bassist, and Joey Baron—Mr. Downtown—share duties here. Johnson, known for his lyrical playing, doesn't keep strict time here. None of the players do in a formal sense. The players are so familiar with the material that the pulse is often simply understood.

The music was written by Taylor, plus Ralph Towner's "Tramonto," Kenny Wheeler's "Ma Bel" and the standard "How Deep Is The Ocean." For the familiar standard, the band drops hints throughout, only revealing its familiar melody at the end. This is music that if made by the bands Sigur Ros, Radiohead, or Portishead would just come off just teenage angst. In the hands of these musicians it is true courage. The title track, a repetition of a simple pattern that turns slowly and gains momentum, calls for a meditation or prayer response. Even in the contemplative "Between Moons," the band emanates an unsullied joy. Johnson's bass hasn't resonated with this much purpose since he recorded with Bill Evans.

Fans of Evans, Keith Jarrett, and Brad Mehldau will find much to like here.

The Bowl Song; How Deep Is The Ocean; Between Moons; Rosslyn; Ma Bel; Tramonto; Field Day.