BY GLENN ASTARITA
January 2, 2020
Sign in to view read count 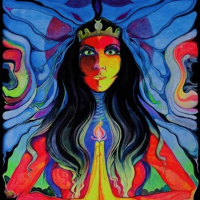 Throughout a mélange of classic psyche rock and other related genres, dappled with cabaret-like chutzpah, UK-reared vocalist, guitarist, keyboardist Rosalie Cunningham maintains a distinct persona on her debut, following the breakup of Purson, the critically celebrated band she co-founded. With fluid walls of sound, disparate time signatures and sprightly themes largely framed on melodic choruses, Cunningham's melodramatic exuberance and unrelenting passion radiates from start to finish.

Even though this is a studio outing, it's easily discernible that Cunningham's penchant for drama would be equally suitable for live performances. Think of 'home theater' from a purely aural perspective with spaced-out electronics effects, swashbuckling hard rock and good timey motifs via weighty and crunching blues rock motifs, contrasted by complex prog rock outbreaks and odd-metered unison phrasings. In addition, the vocalist's audio mix is on par with the instrumentation, where most tonalities ride atop the same plane.

Cunningham's assertive vocal prowess is occasionally subsided by honeyed melodic content along with variances in pitch and a tornadic excitement factor. Cunningham and/or keyboardist Mark Stonell use a mellotron for background swashes along with guitarist Ross Wilson's soloing and the leader's gentle mosaics painted with gentle and well-positioned acoustic guitar parts. But "Riddles and Games" is built on a catchy theme encased within a theatrical flair and sludging rock choruses amid Cunningham's resonating vibrato techniques and 1960s type psychedelic guitar voicings. However, "Butterflies" projects a classic prog rock overture with dark and mystical synth flute lines and a few nods to early Pink Floydian concepts in concert with Euro-folk laced interludes. Indeed, this is a presentation where emotive and lyrically resplendent performance art inhabits your listening space, transcending the norm rather prolifically.

Ride On My Bike; Fuck Love; House Of Glass Red; Dethroning Of The Party Queen; Nobody Hears; Riddles And Games; Butterflies; A Yarn from The Wheel.