By GEANNINE REID
January 2, 2020
Sign in to view read count 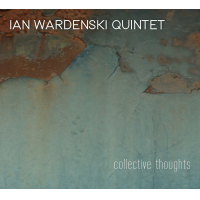 Ian Wardenski is a highly erudite guitarist; he received his BA in Music from Notre Dame de Namur University in Belmont, CA. In fall 2004, he received a Master of Music in Music Theory from Duquesne University in Pittsburgh, PA. Wardenski completed his Ph.D. in Music Theory at The Catholic University of America in Washington, DC. Currently, he is Chair of Performing Arts and is an Associate Professor of Music at Anne Arundel Community College in Arnold, MD. His debut recording Collective Thoughts features some of the best musicians in the MD/DC jazz scene. Tim Powell eloquently lends his soprano and tenor sax skills, while pianist Jerry Ascione, bassist Amy Shook and drummer Frank Russo create a core sound with Wardenski which is moving and articulate. The addition of vocalist Tamara Tucker on selected tracks, using her voice as a valued instrumental augmentation of wordless colorizations, further solidifies the appeal of chamber music combined with the freedom of a small jazz ensemble spontaneity.

The title track "Collective Thoughts" is a Wardenski original composition which is replete with modern jazz sounds. The carefree feel which goes through various time signatures is natural and organic. Shook's support is outstanding in her feel and grounding of the time. Wardenski and Tucker blend nicely for the melody, giving a unique color to the composition. Ascione and Wardenski's solos are the highlight of the track, both are focused on melodic lines which feel and sound beautiful. The composition has a logical flow, and the sections are diverse. This opening track sets an elegant tone for the great music to come.

"On and Off" is a funky jazz selection, based on a strong melody and solid groove. Shook and Russo develop a deep groove with a potent pocket. Wardenski digs into that groove with his solo. His tone is darkened, and he turns on the chorus effects with delay and reverb to get a sound similar to Pat Metheny's. His solo statement is rich and musical. Powell takes the energy even higher as he builds his solo with rhythmic ideas inspired by Russo's playful cymbal work. Ascione balances blues-inspired lines with modern angularity to perfectly convey a solo of style and elegance. The interlude melody has exciting musical developments, proving Wardenski is adept with the pick and the pen.

This may be Wardenski's debut album, but it presents like a seasoned reading throughout. With Wardenski joined by an equally expert ensemble, Collective Thoughts is a long-awaited debut.