By Geno Thackara
February 18, 2018
Sign in to view read count 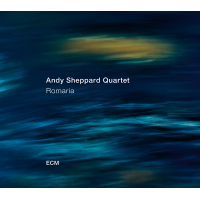 Where so much music treats silence as an exception, Andy Sheppard's recordings find it serving more as the rule. He's never been one for weaving flashy speed runs or feeling pressure to fill space. Even when his sax lines speed up from time to time through Romaria, they serve the mood with tasteful restraint, smoothly evoking the soothing coolness of its cover.

Sheppard uses the term "dream band" to describe this quartet, which is appropriate in more ways than one. Dreaminess is the overarching quality of the session and the group's longstanding familiarity lets them trust each other wherever they drift. Sheppard had already explored the chordless trio format with Michel Benita on bass and Sebastian Rochford at the drumkit; the guitar and electronic tones of sometime collaborator Eivind Aarset made an excellent expansion on Surrounded by Sea (ECM, 2015). Their followup here is just a touch more active in comparison, keeping their identity while turning one more facet toward the light.

The opening "And a Day..." could serve as the start of a proper ambient album if it wished, full of wide breathing space and gentle sweeps of guitar swaying like waves at low tide. It's not long before Sheppard steps into livelier territory with the mid-tempo lines through "Thirteen," though the album's pace never feels anywhere near rushed. Again Aarset provides an atmospheric backing framework while the other players keep the pulse at the most languid of lulls. The rhythm section is often here to provide shading more than actual rhythm throughout; when the pieces ebb, they judiciously choose their spots with tasteful strums and splashes rather than any recognizable beat.

The leader's pieces generally alternate between these two modes to refreshingly tranquil effect. The groove builds to a light-floating cruise during "Pop" and "All Becomes Again," then an actual clatter in between with "They Came from the North." Open air takes prominence for the meditative ballad "Every Flower That Falls" and the finale of "Forever..." (bookended with that opener because they were two complementary takes of the same piece). In either mode it's an atmosphere to soak in at leisure. This quartet's easy chemistry creates a pretty soundscape both inviting and intriguing, and Romaria never loses the airy feel of a cozy reverie even at its busiest.

And a Day...; Thirteen; Romaria; Pop; They Came from the North; With Every Flower That Falls; All Becomes Again; Forever...