Rolling Stones From the Vault: Live at the Tokyo Dome 1990

BY DOUG COLLETTE
January 16, 2016
Sign in to view read count 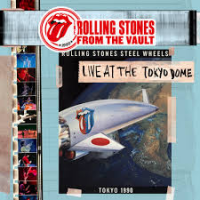 As stylized as are the Rolling Stones' 'From the Vault' packages of CD's and DVD/Blu-rays, the uniformity of their design also reflects the care the iconic British band is applying to their archiving project. From video restoration to new mixes from the renowned Bob Clearmountain, their now steady stream of releases accurately documents that progressive reinvention of the Rolling Stones as a band, within the context of their cyclical touring as well as the increasingly sophisticated evolution of the production process involved.

As the Eighties drew to a close, The Rolling Stones suffered from a schism that arose between, Mick Jagger and Keith Richards, but a very deliberate rapprochement resulted in concentrated studio sessions that resulted in Steel Wheels (Rolling Stones, 1989) and the commensurately sophisticated conception and execution of the subsequent live shows, ten of which occurred at this venue in February 1990 (this title captures the penultimate one). The gleeful smiles from more than one core band member during the course of this show indicates the solidarity they've regained, but not so much as the fact the closing of this two-hour plus presentation is as exciting at the end, with a closer of "Jumpin' Jack Flash." as at the beginning. with the uproarious "Start Me Up."

In more ways than one, Live At the Tokyo Dome 1990 is something of a companion piece to Live at Leeds 1982, (Eagle Vision, 2015) most significantly in terms of Rolling Stones history, documenting as it does the culmination of a tour, this time roadwork begun the previous autumn to support the record released at that time. During this, the Stones first visit to Japan (having been barred in 1973 due to visa hassles), the core quintet is augmented by keyboardist Chuck Leavell as well as long-time saxophonist Bobby Keys, plus additional vocalists and musicians.

All of whose contributions, while prominent for their duration, recede somewhat into the mix in deference to the guitar interplay between Keith Richards and Ronnie Wood, now maintaining a more equal footing with their respective instruments, and the staunch rhythm section of drummer Charlie Watts and bassist Bill Wyman (who would leave the group after the later leg of this tour). Yet the four-piece Uptown Horns complement "Bitch" effectively, while the presence of Bernard Fowler, Lisa Fischer and Cindy Mizelle impart a heretofore unheard majesty to "Tumbling Dice."

The latter singer's prominent role on "Gimme Shelter" may in fact be the best example of how the Rolling Stones aid their audiences in rediscovering the breadth of their catalog. It's less overtly theatrical than Jagger's miming with the two females on "Miss You," but then the song itself has its own inherent drama. On the other hand, the culls from the most recent studio record, such as "Sad Sad Sad" and "Almost Hear You Sigh," though they accurately mirror the studio arrangements, pale next to exhumations such as "Ruby Tuesday," where both Jagger and Richard sing movingly on the chorus of the 1967 number in a subtle sign of their renewed partnership (evident as well in the more overt gesture of the lead vocalist relegating the stage to his partner for his own two-song spotlight).

Similarly, while Mick Jagger's frequent changes of clothes are a relatively minor visual point of reference, they do reflect the increasing sophistication of the Stones stage setup. Of course, these ten shows at the Japanese venue practically demanded such spectacle from inflatable figurines, sprays of lighting throughout the hall, video projections and a multi-leveled stage floor design that opened up greater possibilities for filming; the videographers and editors maximize the latter aspect its fullest extent on DVD with an almost circular progression of camera angles around and within the performers.

It's little wonder the cumulative effect of the audience's anticipation and the band's own excitement in playing (not to mention Jagger's gracious gesture of repartee in the native language) feeds a headlong rush through an otherwise predictably clutch of closing numbers including "It's Only Rock and roll," "Brown Sugar." As those follow interesting choices including "2000 Light Years from Home," the reality is the real intensity of the performance, there as on "I Can't Get No) Satisfaction," derives from the Stones' musicianship, which in turn prevents an overweening sense of nostalgia.

While factually accurate and replete with the insight of a healthily objective long-time fan, Richard Havers' essay in the enclosed booklet, surrounded by all manner of action photos, understates the innate theatricality of "Midnight Rambler," "You Can't Always Get What You Want" and "Sympathy for the Devil." Which, realistically, is as it should be: it is absolutely necessary to see Live at the Tokyo Dome 1990 to fully appreciate it.