Rockin' The Wall: How Music Ripped The Iron Curtain

By Glenn Astarita
January 18, 2015
Sign in to view read count 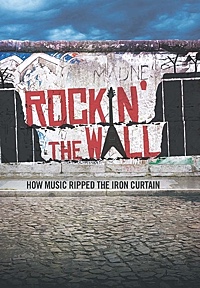 This documentary focuses on the connotations of freedom and innate power of rock music, and its role in bringing down the Iron Curtain. Nonetheless, it's an intriguing history lesson for baby boomers and more importantly, Generation X and Gen Y. Narrated by actor Alec Baldwin, musicians from legendary 60s rock band Vanilla Fudge, Mark Stein (keyboards, vocals) and Vinnie Martell (guitar) perform in a studio setting and add commentary to the events leading to the Berlin Wall's demise.

Stein and the band Mother's Finest composed the score with narratives and historical footage of President Ronald Reagan's famous speech at the Berlin wall, asking Soviet Union leader Mikhail Gorbachev to tear it down. Dialogues and archival footage focus on the 1950s nuclear arms race and pretty much all other factors leading to the Soviet Union's imposed barrier between East & West Berlin, Germany. In addition, The Doors guitarist Robby Krieger and ex-Yellowjackets bassist Jimmy Haslip are on hand to discuss the inspirational message that rock lyrics bring to the table, along with narratives by Rudy Sarzo of Quiet Riot. Contrasting a brief history of rock music and post-World War II developments, the Soviets viewed Eastern Europe as a buffer zone, along with the notorious suppression of its populous.

The first-hand accounts of artists' plight to escape East Berlin interweave throughout the production, serving as a subplot that anchors the primary theme. Yet one minor complaint pertains to the European individuals' broken English which is often difficult to follow. Perhaps the producers should have let them speak in their native tongues at a lower volume and provided translations at a higher volume. Parallel topics include the influence The Beatles projected, also funneled through the dark and ominous pipeline to Eastern Europe, and concerns such as America's dissatisfaction with the Vietnam War and its turbulent race riots.

Detailed descriptions of how LPs were smuggled from West Germany and the foreboding risks of possessing Western recordings could bring about severe consequences amid harrowing accounts of escaping the East's grasp. But solidarity via demonstrations brought about a liberating tone, leading to the ultimate demise of the Berlin Wall, and the influencing aspects of rock music broadcasts behind the Iron Curtain through Voice of America and Radio Free Europe. Ultimately, rock music and of course music in general is a healing force and in these instances, instituted an emancipating tone. These equations are resoundingly expressed and highlighted throughout this prismatic production.