Robin McKelle doesn't fancy herself a jazz singer. However, with a little prompting from her producer, she has released a first-rate jazz album. Unlike other vocalists whose debuts have featured many of the same standards, McKelle went back a little further with Introducing Robin McKelle. She even approached the process differently, spending her own money to make sure she got it done her way.

All About Jazz: A lot of debut vocalists do standards, but your approach was entirely different from what audiences are used to.

Robin McKelle: We wanted to do a concept CD—'30s and '40s sound as apposed to just doing it with a trio or a contemporary sound. We wanted it to have a vibe that when you put the CD on, it takes you to a certain place. It was also about giving something for the symphony, pop orchestra fans. The producer I worked with he really has a love for this old, big band work.

AAJ: You financed the first part of this recording out of pocket. What kind of money are we talking about here, ballpark?

RM: Seven grand. [Trumpeter/arranger/producer] Willie [Murillo] said, "Okay, we'll figure out a way to do it. [Record label] Cheap Lullaby heard about it. A friend of mine there, he had worked with me on a trio recording. He asked me what we were up to, and I said I just recorded this big band CD, and he asked, "You need more money?

AAJ: So it was extremely important that you got to do it your way.

RM: This is the first time I've actually worked with a producer who is as opinionated about the music as I am. There was a lot of compromise on both parts. We were all shooting for the same thing. Cheap Lullaby is all about supporting what the artist wants. "This is why you're the artist, and this is why we sell records.

AAJ: When did you decide to do your own CD?

AAJ: Describe the selection process for the songs you recorded.

RM: We started with more than 100 songs. We were on such a tight budget. We had planned to do it for under $10,000. Some, we really wanted to record. Some, he already had charts for and he would just change them to my key. Arranging and copying all that cost so much money.

AAJ: Did you know from the start that you wanted to break the mold, so to speak, on how you interpreted this music?

RM: Willie's a trumpet player, and he's also the musical director for the Brian Setzer Orchestra. It's such a pleasure to be able to sing with such a big band. When he said he could help me with it, I was just enamored with it. 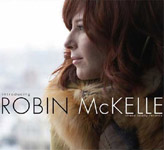 class="f-right" >AAJ: Who are your influences, musically?

RM: Two of my favorite jazz singers are Ella Fitzgerald and Sarah Vaughan. They're both so amazing. I am extremely influenced by Aretha Franklin, Chaka Khan, Donny Hathaway and Marvin Gaye. My approach comes from different styles, and it helps me find my niche. My mother was also a singer.

AAJ: Now that Robin McKelle has been introduced, what can we expect from her in the future?

RM: We're just starting to work on a new CD, but not sure what we want do with it. We're working on something, but we're not quite sure about it [laughs]. Hey, I got lots of jokes, too. None us knew the response we were gonna get, and it's been wonderful.

McKelle takes her work seriously enough to put forth thousands of dollars to make sure she gets it right, but no so much that she doesn't have fun with the process. Her passion, her joy at singing these vintage big band selections comes through in grand fashion.