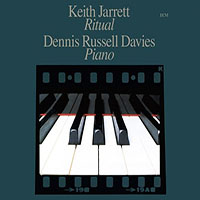 In pianist Keith Jarrett's vast ECM catalogue, albums on which he does not play aren't exactly common, but nor are they completely uncommon; his 1974 double-disc set In the Light features a handful of tracks on which he performs, but its primary focus is on Jarrett the composer. Ditto Luminessence (1975), a trilogy of compositions for string orchestra and improviser Jan Garbarek—a precursor to Arbour Zena (1976), also featuring the Norwegian saxophonist and string orchestra, but also including Jarrett and bassist Charlie Haden as featured performers. That album is part of ECM's Re:solutions series of reissues—seven albums in all so far, four on CD for the first time, one previously only available for a limited time in Japan, and all also available in vinyl and high resolution digital formats. Another Re:solutions entry, Ritual remains a complete anomaly in Jarrett's discography: a composition written for solo piano in which he is not the featured performer.

A two-piece suite broken up more, most likely, to suit the needs of its original vinyl release than anything else, Ritual is unmistakably Jarrett, but it's a whole different experience to hear another pianist perform it—especially one like Davies, who comes largely from the classical world and is perhaps better known as a conductor whose whose work, beyond a 40-year relationship with Jarrett, includes ECM New Series classics like Arvo Pärt's Tabula Rasa (1984) (on which Jarrett performs, coincidentally), as well as the more recent Melodic Warrior (2013), from guitarist/composer Terje Rypdal.

Davies may have little connection to jazz, Americana, gospel and many of the other reference points which create the sum total that is Jarrett, but his performance of Ritual respects the composer's predilection, in this case, for the juxtaposition of touching impressionism and bolder dramaturgy. That this music is, indeed, scored may seem an anomaly for a pianist whose own solo recordings—from 1975's classic The Köln Concert to the overdue 2013 complete release of 1982's Concerts—Bregenz / München and more freshly minted Rio (2013)—are all about in-the-moment drawing of form from the ether. It's easy to forget that Jarrett, in his early days, was a more formal composer of significance for his two 1970s quartets, so it's unknown whether or not Ritual was a solo improvisation that he then scored, or did he actually compose the piece over time, with pen and paper at hand?

Ultimately it matters not, as the melodic disposition that is so often at the heart of everything Jarrett does remains a constant here, and Russell Davies' performance is both confident and assured. His touch may be a tad firmer than Jarrett's in the quieter moments, his attack more vehement in the more dramatic passages, but these are nothing more than the consequences of interpretation.

In the end, Russell Davies best articulates the most important aspects of this brief (just 32 minutes) yet superb recital in his brief notes: "although I could never, in improvisation, begin to assume his qualities as a creative force, Ritual is a vehicle through which I can bring his spirit to the listener. Those who know Keith will hear him in this music—it couldn't have been written by anyone else."