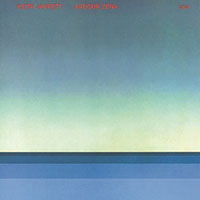 Given his overall focus on just two projects over the past three decades—with the exception of relatively rare diversions into the classical world or recordings like Jasmine (2010), an intimate duo date with bassist Charlie Haden—it's easy to forget that there was a time when pianist Keith Jarrett was not just one of the most innovative performers on the planet, but a writer constrained by no stylistic boundaries. These days, focusing as he does on performing solo and with his longstanding Standards Trio, it's only with the release of archival finds like Sleeper—Tokyo, April 16, 1979 (2012),with his Belonging Quartet of the mid-to-late '70s, that we're reminded his purview was once far broader.

Not that his current activities aren't broad in scope—Somewhere (2013), is one of his best Standards Trio records since 1988's Still Live—but in his 42-year relationship with ECM Records, it was during his first decade that the pianist more clearly adhered to the label's genre-busting modus operandi, devoting "itself to all kinds of music, as long as it was good."

That MO, the cornerstone of its Re:solutions series of reissues which, for its first batch, has put out seven albums on CD (four for the first time, one previously only available for a limited time in Japan), vinyl and high resolution digital formats, was exemplified in much of Jarrett's output between 1971's Facing You and 1982's Ritual—a Re:solutions release of solo piano music, written by Jarrett but performed by noted conductor Dennis Russell Davies. But another Re:solutions reissue, 1976's Arbour Zena (unlike Rituals, previously available on CD), was an early example of Jarrett being more than a groundbreaking pianist; he was also a distinctive composer—and not just in the jazz sphere of his Euro-centric Belonging Quartet or aptly titled American Quartet.

Jarrett had already released music more aligned with the classical sphere on 1974's In the Light, which contained works for string quartet and brass quintet, a fughata for harpsichord and more; but it was with Arbour Zena—reuniting the pianist with the string section Stuttgart's Südfunk Symphony Orchestra and conductor Mladen Gutesha (who'd performed In the Light's "Metamorphosis")—that Jarrett found the magic nexus between composition and improvisation, both through his own contributions on piano and with the participation of Haden and saxophonist Jan Garbarek, also making the record an even broader marriage of his European and American concerns.

Arbour Zena's three extended pieces—the shortest, "Solara March," is nearly 10 minutes while the longest, the side-long "Mirrors," comes close to 28—explore Jarrett's more romantic side, with occasional references to his Americana and gospel roots. Jarrett's writing is largely structured for the string orchestra, with the pianist, Haden and Gabrarek overlaying improvisational contributions that integrate seamlessly; as ever, with ECM, this is no "jazz group with strings" affair—even the term "Third Stream," used by Gunther Schuller in a 1957 lecture to refer to a synthesis of classical and jazz, doesn't really apply. Instead, in particular on "Mirrors," Jarrett and Garbarek explore ways to intertwine with the strings' compositional contexts to create something that's more a confluence—something neither jazz nor classical, but simply something else.

The final minutes of the album's lengthy closer do include some unfettered interplay between Jarrett and Garbarek—and there's a beautiful passage in "Solara March" where the strings lay out briefly, allowing Jarrett, Haden and Garbarek more unrestricted elbow room, though still within the confines of an underlying structure to which the strings soon reengage, leading to a conclusion that could easily fit in either of his jazz quartets of the time. But in conjunction with the strings, what makes Arbour Zena so compelling is its utter unification of result.

Jarrett had already enlisted Garbarek for another string orchestra recording, 1974's Luminessence: Music for String Orchestra and Saxophone—like In the Light, also with Südfunk and Gutesha—but there Garbarek was the sole improviser, with Jarrett acting solely as composer. It could be seen as a precursor to Arbour Zena, a more successful recording overall (though Luminessence is far from lacking in charm), if for no other reason than the interactive possibilities of three musicians as superb as Jarrett, Garbarek and Haden gave the pianist much more grist when it came to exploring his nexus of form and freedom, and sounds more readily associated with classical music and jazz. One of seemingly countless career high points, Arbor Zena is another superb entry in ECM's Re:solutions series, demonstrating both the label and its artists' predilection for defying classification and, instead, simply focusing on a relentless search for new musical terrain and fresh creative perspectives.