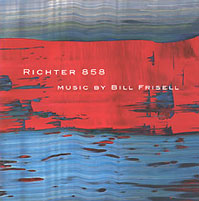 Commissioned to create music for a book project on the German painter Gerhard Richter, guitarist Bill Frisell opened his book of guitar techniques to enhance the painter's art.

Given instructions and eight Richter images, Frisell composed pieces for the 858 Strings Trio of Jenny Scheinman, Eyvind Kang, and Hank Roberts, a unit which can be heard on Frisell's 2004 release, Unspeakable. These eight pieces were recorded live in the studio without overdubs, remixing or post-production change. Like a painter working a canvas, the quartet plays from compositional concepts and improvises where needed.

The music diverges from the folk-leaning of Frisell of late. His employment of a string trio parallels the European concept of painting, with its continental origins as a starting place. Frisell then does as Richter does with painting, smearing concepts of modern chamber composition.

This recording, with its many Frisell effects, is reminiscent of his early Elektra recordings and the little-known American Blood, Safety In Numbers (Intuition, 1995). While you cannot consider this a folk record, certain Frisell-isms are present. His distinct sound always presents itself. His minimal use of space and order are here too. If the producer David Breskin had wanted the guitarist to lose his identity within these paintings, it doesn't happen. The German painter's work is interpreted from Frisell's perspective. In other words, this is a Bill Frisell recording.

The disc plays both as an SACD and CD; in addition, it features a CD-ROM with MP3 music to accompany a slide show of the paintings, which can also be found reproduced in the booklet.