Harry Allen: Rhythm on the River 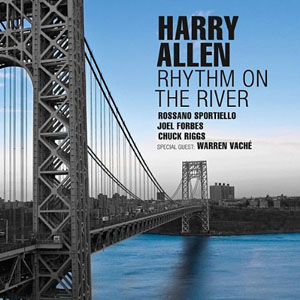 Tenor saxophonist Harry Allen is a keeper of the flame ignited by the likes of Zoot Sims and Al Cohn. Whilst his music's nowhere near any cutting edge, he falls back upon the staples of the swing thru bop vocabulary like a man to the manner born and, over the course of this river-related program, demonstrates just how much the music means to him.

The persuasiveness of his playing stems in part from his authority. To hear him working his way through "Down by the River" is to know this. He has a way of going about his business which results in a freshness which is no small achievement, given the age of the material he works with. Thanks to this, there's even the spark of character in his reading of the venerable "Cry Me a River." His phrasing is tinted with a strain of poignancy which doesn't come easily either, while pianist Rossano Sportiello contributes accompaniment which only goes to show how simple isn't always necessarily easy.

Allen's been judicious in his choice of band mates on this occasion. On the sprightly "River, Stay 'way From My Door," cornetist Warren Vache highlights, yet again, how he's also a most persuasive advocate. Over the course of his solo, Vache intuitively seems to make every note count and, considering the number of precedents there are for trumpeters/cornetists in this field, the degree to which he's his own man is notable; only tangential echoes of Joe Newman spring to mind.

"Walking by the River" is taken at a carefree clip, which comes quite naturally to players who celebrate their love for what they do every time they play. The resulting statements provoke momentary thoughts that all is right with the world—a feat which, in the world we currently inhabit, is no small achievement.

Riverboat Shuffle; Cry Me A River; Rhythm of the River; Lazy River; Roll On, Mississippi, Roll On; Down By the River; River, Stay 'way From My Door; Blue River; Weary River; Old Folks at Home (Swanee River); Ready for the River; Sleepy River.