By David A. Orthmann
November 5, 2003
Sign in to view read count 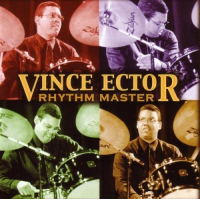 Energized by a core trio with bassist Dwayne Burno and pianist John di Martino, drummer Vince Ector's debut displays the loose, enjoyable feeling of a hard bop blowing session, yet the scope of the material and arrangements indicate a great deal of thought and preparation. Inventively utilizing a number of combinations of trombone, tenor and soprano saxophones, flute, trumpet, guitar, and percussion, the set includes American popular songs (eg. "I've Got The World On A String"), jazz standards (eg. "Short Story"), and a few originals. The relative brevity of individual tracks (only three of nine are over seven minutes) discourages any excess or self-indulgence, and all of the soloists make the most of their limited time in the spotlight.

Ector is an ingenious musician who demonstrates numerous ways of orchestrating the band's momentum. The opening cut, his composition "South Philly Groove," is a brisk shuffle that crackles with the drummer's energy and resourcefulness. Without breaking the continuity established by the static but swinging rhythmic pattern, he galvanizes the head by hammering eighth-note triplet fills to the tom-toms, and adds other brief asides. Ector lays back for the first couple of choruses of Bob Ferrel's solo, then jumps in during a pause and sends the band into orbit by mimicking the trombonist's phrases on the snare and cymbals.

On "Groovin High," Ector mobilizes the trio by moving from brushes to sticks and back to brushes, displaying a similar approach to both implements. As di Martino states Dizzy Gillespie's theme, the decisive snap of the bushes predominates; and muffled, run-on bass drum accents and the occasional soft sizzle of the crash cymbal round out the sound of the drum set. During the first chorus of the pianist's solo, Ector's strokes turn brusque, offering a hectic counterpoint to di Martino's bebop-oriented lines. For the second chorus, he switches to sticks, and this time the broad, constant hiss of a ride cymbal stands out, pushing the bass and piano in an unwavering, linear way. Back to the brushes for Burno's turn, he's both lower in volume and a bit smoother then before. Then, as a prologue to an extended drum solo, Ector exchanges eights with di Martino. His weighty, exaggerated hits to the bass drum make for explosive punctuation, shaking up phrases and making the brushes sound almost wispy in comparison.

These kinds of fireworks are nowhere to be found on the classic ballad "What's New." Delineating the pulse by gently pressing the hi-hat pedal on 2 and 4, Ector mostly concentrates on creating texture and color. The smooth sweep of his brushes make a fine match for the breathy tone of Craig Bailey's flute. When Bailey and trombonist Avi Liebovich take turns playing the melody, the drummer intermittently rakes a brush against the cymbal in unison with di Martino's chords.

Moreover, he further enhances the music by using mallets in a variety of ways. Carefully executed rolls to the drums at the beginning of the track evoke the rumble of a rapidly approaching thunderstorm. He builds a crescendo on the cymbal that serves as a bridge between Bailey and Liebovich's portions of the melody. And, towards the end of Bailey's solo, Ector's clopping tom-tom strokes momentarily draw attention away from the music's reflective disposition.