By Donald Elfman
February 10, 2008
Sign in to view read count 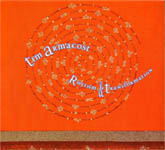 Saxophonist/composer Tim Armacost spent a year in Delhi starting in 1993 studying Hindustani rhythms. In 2002, he received a grant from Chamber Music America to write a suite that places these rhythms in a jazz context. The result is the title suite of this remarkable album. Two of the players on the disc—pianist Bruce Barth and drummer Billy Hart—are part of Armacost's working quartet and that they are open to the kind of rhythmic flexibility demonstrated here goes a long way to grounding the music but keeping it open to new possibilities.

Check out a knockout composition that puts this all into perspective. It's "Indian News and with the help of bassist Ugonna Okegwo, tabla player Ray Spiegel and trumpeter Eddie Henderson, the band slams into a hard-driving groove that reflects the best kind of modern jazz thinking but moves forward thanks to the help of the new textures. Armacost plays a kicking tenor and is followed by a slightly more abstract but no less powerful Henderson. There are some intriguing shifts between the Indian rhythm called the tihai, a 33-beat phrase where the last beat serves as the downbeat of the next section of 32.

Armacost also plays a beautiful alto flute on the tape-looped excursions of "Circular Interlude and the closer "Circular Postlude," on which tabla and tanpura are added to the loop. And, on the same instrument, Armacost serves up a gorgeous "While My Lady Sleeps in the mood of the classic Coltrane ballad version but with deft coloring from Barth and Hart, complemented by the drone of Spiegel's tanpura.

The title suite is in four parts opening with a medium tempo cooker that makes use of the clave rhythm. Next is the multi-faceted composition "Special Blue," which travels many places and morphs, finally, into slow blues. The third movement, "3x3x3," is the closest to the feel of straight Indian music; at the center is the tabla but the horns play a wonderfully sinuous line. And finally, "Nimble Pani brightly and cheerfully suggests calypso with Armacost, Henderson and Barth dancing out solos.

What's particularly great about this session is that there's no trace of gimmickry. It's organic and all of a piece and it reveals Armacost to be a vital and creative force in modern music.