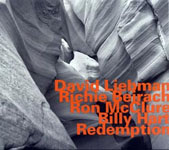 In 2005 Quest did Led Zeppelin one better, reuniting all four original members to play gigs in the US and Europe. Active in the 1980s and into the early 1990s, this super-group was just one project that over the decades involved saxophonist Dave Liebman and pianist Richie Beirach. Interest in the band was renewed by a set of archival material released by Mosaic in 2004.

Now comes Redemption. Recorded live in Switzerland and France, the album finds Quest playing with undiminished ardor, revisiting older material but also venturing into new areas. Monk's "'Round Midnight" is the opener and a sterling example of Liebman and Beirach's inimitable chemistry (bassist Ron McClure and drummer Billy Hart lay out). In place of the traditional intro, Beirach opts for haunting textures and dense chordal clouds, though he and Liebman spell out the standard coda just before a blazing cadenza on soprano sax.

"Ogunde," from Coltrane's later period, finds Liebman switching to tenor, an instrument he'd sworn off during Quest's initial lifespan. Between this and another tenor feature, the old Russian standard "Dark Eyes," we hear Quest's highly personal take on the modernist continuum. Trane's surging swing and ecstatic holler, Elvin Jones' slow 3/4 burn, the open rhythmic interplay that Hal Galper has termed "furious rubato": Quest couches all of this in the dark, polytonal harmonic language that long ago earned Beirach his nickname, "The Code."

The most surprising twists occur during Ornette Coleman's "Lonely Woman." Liebman renders the theme gorgeously on wooden flute and Hart, toward the end, slips into a kind of hip-hop groove—almost a nod to the Nu Jazz aesthetics that came into being during Quest's dormancy.

There are fewer originals on Redemption than typical for Quest. The title track, by Hart, is heard in its longest recorded version to date. Liebman's "WTC," conjoined with Beirach's "Steel Prayers," is a poignant response to the 9/11 attacks, evolving from abstract tenor musings into soprano balladry, set in an uncharacteristic major key.