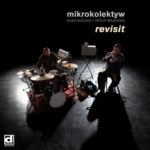 The Polish avant-jazz duo Mikrokolektyw has been creating a buzz on the European music scene for the last few years. Consisting of trumpeter Artur Majewski and drummer Kuba Suchar, the duo explores improvisations of the moment over electronic rhythm loops on the eleven-track disc Revisit. Having shared the stage with high-profile Chicago musicians like Fred Anderson, Nicole Mitchell and Rob Mazurek, it seems fitting that Mikrokolektyw is the first ever European jazz group to record for Chicago's Delmark Records.

The layering of simplistic loop-based rhythms with acoustic sounds creates an effortless flow of pre-conceived structures and improvised coloring. Majewski's muted trumpet dances gracefully around the urgency of Suchar's pulsating repetitions on the opening title track and the spacey "Rocket Street." Suchar develops a symbiotic relationship with the electronic drones and high pitched effects on pieces such as "Running Without Effort" and "Tiring Holiday," ignoring the urge to indulge in bombastic flourishes and instead focusing on a cohesive groove. More of a free-play effort is heard on "Lipuko," where Suchar digs in with controlled aggression underneath Majewski's hypnotically cheery theme. The trumpeter hits a creative peak over the low rumbling of "Casio."

While there's distinctiveness to each track on Revisit, each contributes to a cohesive whole. From start to finish, the disc unfolds like a suite, shifting boundlessly between moods; from somber despair to joyful optimism. Herein lie the unique possibilities of this unconventional, refreshingly musical duo.