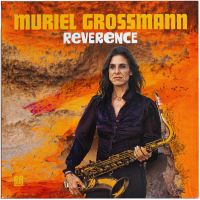 Since the late 1990s, the Spanish island of Ibiza has been synonymous with two things: electronic dance music and 3,4-Methylenedioxymethamphetamine aka MDMA or ecstasy. Austrian-born saxophonist Muriel Grossmann has lived on Ibiza since 2004 and her intense wall-of-sound style of astral jazz suggests she is familiar with both those pillars of Ibizan nightlife.

Grossmann has not spent her time in Ibiza simply partying and chilling, however. Reverence is her eleventh album since moving to the island. She fronts her regular quartet comprising bass guitarist Gina Schwarz, drummer Uros Stamenkovic and guitarist Radomir Milojkovic, who has been with her since her debut, Homecoming Reunion (Dreamland, 2007). The group has been expanded for Reverence by Hammond B3 organist Llorenc Barcelo, who makes a terrific addition to the lineup.

Grossmann's main saxophone is the tenor, though she also plays alto and soprano. Her composing style is strictly modal and her sound evokes late period John Coltrane and post-Coltrane Pharoah Sanders. Her harmonic palette is limited but she makes up for it through the exuberance and commitment of her playing. Milojkovic brings echoes as diverse Sonny Sharrock, James Blood Ulmer and Grant Green; Barcelo's B3 is winningly retro; and Schwarz and Stamenkovic drive the groove. Such is the band's hard-wired intensity on some of the tracks that it touches on La Monte Young and drone music.

"Count Basie once said about his band that he wanted it sounding like one big drum," says Grossman. "That's what I aimed for with this album." She hits the target, ramping things up with a little Phil Spector along the way and enriching the percussive mix with African instruments including a balafon, kalimba and ngoni.

Reverence is a double album which clocks in at around 77 minutes. The pace is mostly high energy but Grossmann rings the changes with more restrained and reflective passages. If you like some rocket fuel with your astral jazz, this one is for you.