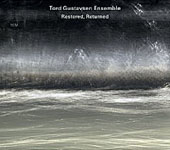 With three albums mining a seemingly narrow area—and proving just how broad that territory really—Norwegian pianist Tord Gustavsen changes gears with Restored, Returned. Abandoning the longstanding trio that, with Changing Places (ECM, 2003), The Ground (ECM, 2005), and Being There (ECM, 2007), brought him greater international acclaim, Restored's quintet remains relatively introspective in tone. Still, with singer Kristin Asbjørnsen and saxophonist Tore Brunborg—whose recent Lucid Grey (DRAVLE, 2009) received its own share of well-deserved attention—Gustavsen's palette is expanded, allowing him to more fully realize the song-like proclivity that's been at the core of much of his writing.

Gustavsen—who, as musical director for singer Silje Nergaard, is no stranger to working with vocalists—plays on Asbjørnsen's The Night Shines Like the Day (Universal Norway, 2009), and has also been touring with her, including an engaging performance at Molde Jazz 2009. The two also collaborated on Nymark Collective's imaginative reworking, Bessie Smith Revisited (Independent, 2008), making the singer's rich expressiveness—incorporating the occasional grit but never, despite soaring luminously, resorting to excessive vocal pyrotechnics to impress—not just well-suited to Gustavsen's writing, but possessed of a deeper internal connection.

Drummer Jarle Vespestad is back from Gustavsen's trio, but instead of Harald Johnsen, Gustavsen has recruited Nymark bassist/co-founder Mats Eilertsen, no stranger to those familiar with guitarist Jacob Young's sublime Evening Falls (ECM, 2004) or drummer Thomas Strønen's more overtly adventurous Parish (ECM, 2006). Vespestad still demonstrates an uncanny ability to play at a near-whisper, but has the opportunity to play more forcefully on the title track, which moves from the gently intensifying pedal tone of its intro to a more propulsive reference to Gustavsen's longstanding gospel interests (and Asbjørnsen's; her own Wayfaring Stranger (Universal Norway, 2006) was a vital look at American spirituals). "The Swirl / Wrapped in Yielding Air" explores Middle Eastern harmony but ultimately shifts, with a deep groove propelled by Eilertsen's visceral tone and Vespestad's gentle but insistent pulse, towards bluesy territory, with Asbjørnsen's expressive yet restrained delivery one of the album's high points.

Brunborg—another ECM alum dating back to Masqualero's three albums, with bassist Arild Andersen, drummer Jon Christensen, and trumpeter Nils Petter Molvaer—shines throughout with an approach that stems unmistakably from the traditionalist leanings of Jan Garbarek, but brings greater warmth and a personal lyricism to "The Child Within," a spare, melodic duet with Gustavsen that opens Restored.

Gustavsen continues to be a marvel of economical invention, a player who speaks little but says much. Restored, Returned is a logical extension/expansion on his previous ECM releases, as his nuanced, tender playing eschews stereotypical references to Norwegian music as icy or cool, even as "The Way In" cinematically traverses imaginary bodies of water explored regularly by pianist Ketil Bjornstad. But with more colors at his disposal and a greater attention to song form—even as the result feels somehow freer—Gustavsen has shaped an album even more appealing in its subtle but unmistakable experimentation.