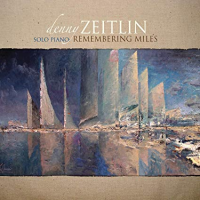 Pianist Denny Zeitlin, pushing hard ahead in an extraordinary recording career that began in 1963 with a sideman job on Jeremy Steig's Flute Fever (Columbia Records), has settled artistically, fifty years on, into a pair welcoming homes: Sunnyside Records, for whom he has recorded ten superb albums, beginning with 2009's In Concert Featuring Buster Williams and Matt Wilson, and Oakland, California's Piedmont Piano Company, where he has taken up residence in recent years to present solo piano recitals focusing on a single composer per show. His reading of saxophonist Wayne Shorter's music resulted in Early Wayne: Explorations of Classic Wayne Shorter Compositions (Sunnyside, 2016). The year 2019 finds Zeitlin presenting another Piedmont show: Remembering Miles, a deep dive into the music of trumpeter Miles Davis.

The Miles Davis songbook is vast, beginning with his work with Charlie Parker in the late 1940s, running through his late 1950s work for Prestige Records, the first great quintet in the late 50s, 1959's Kind Of Blue (Columbia Records)—perhaps the finest jazz album of all time—followed by a consistently envelope-pushing career that lasted until the early 1990s. Denny Zeitlin visits each era, beginning with his take on "Solar," from the early Davis breakout album Walkin' (Prestige, 1957). Further into the set he explores "Milestones," a tune Davis recorded with Charlie Parker in 1947. Push the fast forward button and we find Zeitlin's rendition of Cyndi Lauper's 1985 pop hit, "Time After Time," recorded by Davis on his You're Under Arrest (Columbia, 1985) and "Tomaas," from another late career recording, Tutu (Warner Brothers, 1986).

Put all these Davis renditions on a playlist—some of them covers, some originals, and some certainly "adopted" as his own—and it might not make much of a cohesive statement, with the different instrumentations (electric and acoustic) and moods and ongoing modernizations. But it would be a fine listening experience. With Zeitlin taking these selected tunes on—and interpreting liberally—with just his piano and his own idiosyncratic re-imaginings, you get an essence of two souls.

Zeitlin is always startlingly virtuosic, and he is blessed with freewheeling improvisational elasticity. Especially here; the Davis songbook seems to have inspired him. "Dear Old Stockholm," (the 1952 take on the song) is a robust rendition in Zeitlin's hands, beginning with a straight reading of the lovely melody, the unfolding of a slow, fluid groove, followed by freer interlude, prickly and percussive, with tumbles of notes leading into left hand rollick, a right hand glissando, then a re-introduction of the melodic thread.

Zeitlin explores Davis modal music with "Flamenco Sketches," from 1960's Sketches of Spain (Columbia) and "Milestones (1958 Version)" from the 1958 Columbia Records album Milestones. The former is a drifting, abstract re-examination; the latter is a surging, rhythm-shifting romp, a tumultuous celebration.

Zeitlin closes the set out with "Weirdo," inspired by Davis' 1954 version of the tune (it showed up later as "Sid's Ahead," on the previously mentioned Milestones album). Zeitlin captures the mood of this blues to perfection, strolling a line between the playful and the dangerous, closing out a dynamic, on-edge immersion into the music of Miles Davis.

One of the most compelling and beautiful albums of Denny Zeitlin's career.