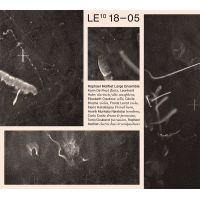 On his debut album, Noumenon (Ruweh Records, 2016), Belgian-born bassist Raphael Malfliet incorporated his influences of modern classical, avant-garde, and improvised music, without deference to any particular genre. In that trio setting, Malfliet mixed textures and loose, fluctuating melodies that played as a surprisingly full sound and served to emphasize the opposing uses of silence. The composer/bassist expands to a large ensemble on LE10 18-05, sometimes employing the instruments' natural voices, but often imposing extended techniques in abstract settings.

Malfliet applies his interest in astrophysics to the album's title; specifically, the naming conventions used for space discoveries. He explains that, as used here, the title "means LE = Large Ensemble, 10 = 10 musicians, 18 = 2018, 05 = May (the date when the ensemble first came together)." Further, the album artwork distinguishes the interaction of particles and, with the title, symbolically represent a disparate ensemble, working in sync, with an air of neutrality.

Malfliet composed each of the nine pieces on LE10 18-05 and they run the gamut from less than one minute to more than fifteen. The longest piece is the opening "Arborescence," which might serve as an overture. From an extended silence to a drone of strings, the ambiance is finally, but only briefly, shattered with percussion and horns. The piece transitions to stately then otherworldly themes, and approaches silence once again before it suddenly, and unexpectedly, falls into the hands of the brass and two percussionists. Those percussionists—Carlo Costa and Toma Gouband—are the primary players on "Supersonic" as the ensemble splinters. The two have the stage to themselves later on the rousing "Parcours." Strings, off-kilter, and moving through wild variations in tempo, are the different sound of "Orbital Decay I" and its brief, frenetic second and third parts. The ensemble doesn't sound as if it comes together again until the closing "Trajectory," an episodic set of intangible sound textures.

Malfliet talks about finding equilibrium between improvisation and composition but using the latter as a platform for improvisation. That would seem like a self-fulfilling destiny, but as a leader he is less democratic in arranging the music. The score is elaborately defined by structural guidelines that dictate most facets of the playing. In that the music sounds so in-the-moment, Malfliet has succeeded in bringing listeners another very original and thought-provoking project.