By George Kanzler
January 11, 2010
Sign in to view read count 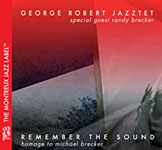 Working with a tentet similar to mid-size bands he's led on his own projects, composer/arranger Jim McNeely has fashioned a musical tribute to the late Michael Brecker that manages to conjure up aspects of the late saxophonist's music and musical personality, without resorting to overt mimicry or pastiche. Led by alto saxophonist George Robert, with faculty from the jazz program he heads at Switzerland's Lausanne Conservatory, the Jazztet negotiates the harmonic and counterpoint-rich music with esprit and élan.

The music references various periods and stylistic aspects of Brecker's career, beginning with the aptly titled "Burn," a flag waver the composer says is inspired by Brecker's many up-up-tempo quartet numbers. But "Burn" is no quartet piece; it's a full-fledged orchestral number with a theme that burgeons into counterpoint and fugue-like contrasts before giving way to Robert Bonisolo's inspired tenor sax and guest Randy Brecker's fiery trumpet solos over restlessly churning horns. "Silver Spheres" recalls Michael Brecker's tenure with Horace Silver, in an undulating tune that could have come from the pianist's book. High and low horns provide an ongoing ensemble counterpoint on "In Step, Out Ahead," a salute to Brecker's time in Steps Ahead, while the rocking backbeat groove of "Hudson Funkshon" recalls the Brecker Brothers years, complete with a distorted guitar solo and a saxophones/flute soli emulating the sound of the EWI (electronic wind instrument) that Brecker played in that band. Brecker's more spiritual side is remembered in the ballad "Into Thy Hands," featuring Robert's alto and a coda from Mathieu Schneider's flute, and the title tune, a gospel-influenced number with Bonisolo's tenor in the lead interacting with the horns as choir.

Burn; Silver Spheres; In Step, Out Ahead; Bumps; Into Thy Hands; Hudson Funkshon; Remember the Sound.