By Glenn Astarita
April 2, 2009
Sign in to view read count 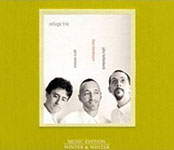 The musical sound and scope of Refuge Trio resembles a sanctuary of genre-morphing frameworks, neatly compacted into a conspicuous group-focused mindset. Appropriately, the trio's name was inspired by Joni Mitchell's song "Refuge of The Roads," from the legendary singer/songwriter's Hejira (Elektra/Asylum, 1976), to coincide with a performance at the 2002 Wall-to-Wall Joni Mitchell concert at Symphony Space in New York City.

The progressive and versatile jazz stylists that form Refuge Trio have covered an expansive musical terrain amid solo works and various ensemble permutations. On paper, something unique and, perhaps, extraordinary would be expected. The group meets such expectations in this multihued, self-titled program, teeming with polytonal contrasts and engaging song-forms.

Vocalist Theo Bleckmann launches the program with a solemn solo recital of Mitchell's "Refuge of The Roads," as the band brandishes an unconventional format akin to a field of musical dreams. With keyboardist/accordionist Gary Versace's solos, and drummer/percussionist John Hollenbeck's keen employment of timbre, the band largely anchors itself on tuneful themes. But Bleckmann adds flotation-like lyrical iterations and wordless vocals as a third instrumental element.

The trio dispels a traditional mode of delivery, which works irrefutably well here. It's a persuasive collaboration that can often radiate into unorthodox phrasings, abetted by Bleckmann's shrewd live electronic treatments that compliment either the clement or thrusting passages. And the trio frequently reinvents a particular melody line via an improvisational element. Sure enough, they triumphantly merge a cerebral game-plan with high entertainment, creating a top pick for 2009.

Refuge of The Roads; To What Shall I Compare This Life; Pinwheel; Rural Bliss; Edges; Bright Moon; Peace; Misterioso; Child's Play; Yang Peiyi; Hymn; Happiness; All Our Yesterdays.