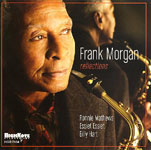 Alto saxophonist Frank Morgan remains one of the coolest bebop players and an inspiration to all. The legend of his losing three decades of his musical career to drug abuse and incarceration, followed by a significant rebirth in 1985, has already been retold too many times. Morgan's post-'85 albums remain a study in lyricism, swing and, in a word, the very best of the lifelong lessions imparted by his mentor, Charlie Parker. Unfortunately, Parker's influence upon the then-teenage Morgan was the primary cause of his troubles.

The albums he's recorded over the past two decades on Contemporary, Antilles, Verve, Telarc and HighNote all possess these same qualities, whether Morgan is examining the fluent and fast-charging sense of Bird's bebop or the low-key and lyric beauty of his balladry. Frank Morgan suffered a serious stroke ten years ago which put a halt to his recording career until City Nights (HighNote, 2004), which he followed up with Raising the Standard: Live at the Jazz Standard, Vol. 2 (HighNote, 2005).

The rhythm section employed by Morgan on Reflections is perfectly sympatico with the altoist. Pianist Ronnie Mathews, bassist Essiet Essiet and drummer Billy Hart are as perfectly meshed with the altoist as have been quality players like George Cables, Curtis Lundy, Cedar Walton, Billy Higgins, Kenny Barrron and Ray Brown, who played on some of the seventeen Frank Morgan sessions released since 1985.

Morgan has a long history with the tunes chosen for this session. Most of them are ballads, but the Miles Davis piece "Solar" is done up-tempo. Morgan recalls the song vividly in the liner notes and was disappointed that he never got to hear the original altoist, Davey Schildkraut, on the original. Likewise, on the Davis classic "Walkin'," Morgan imbues his solo with great feeling and remembrances of the 1954 Prestige version. The choice of ballad titles like "Crazy He Calls Me," "I'll Be Around" and "Blue Monk" fit in perfectly with the Morgan mystique.