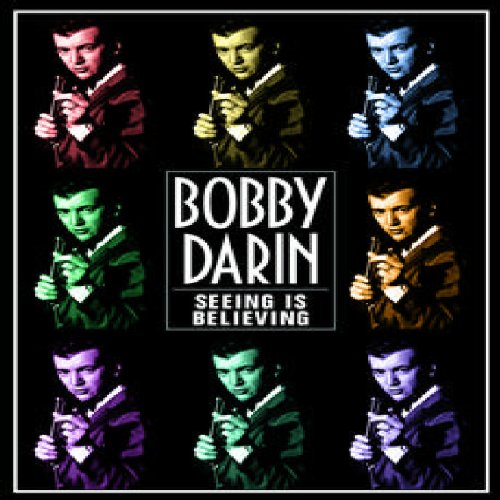 Bobby Darin: Seeing is Believing is the follow-up to Hyena's previously released CD/DVD collection of rare appearances Aces Back to Back (2004). Darin (1936-1973) has been the subject of considerable interest as evidenced by Aces Back to Back and the Kevin Spacey biopic Beyond the Sea (2004).

Born Walden Robert Cassotto on May 14, 1936, Darin was raised by his grandmother in the Bronx, New York. Grinding poverty took an early, especially pernicious toll on the frail Darin, contributing to multiple episodes of rheumatic fever, recurring events in his life which culminated in his death. Darin had a genius IQ coupled with almost feminine good looks. Excelling in secondary school and college, he left college early to perform in the Borsch Belt.

Following a short stint with Decca Records, Darin signed with ATCO, and in 1958 penned his first hit with the radio personality Murray Kaufman (Murray the K): "Splish Splash. From that point until his early death from heart disease in 1973, Darin enjoyed a broad popularity comparable only to that of Frank Sinatra.

Bobby Darin: Seeing is Believing provides footage of 20 television performances recorded while Darin was at the height of his artistic powers (and near the end of his life). A multi-instrumentalist, Darin was equally talented as a pianist, guitarist, vibraphonist, drummer, and harmonica player. The viewer of this collection gets to see him in action on most of these instruments.

While not definitive, Bobby Darin: Seeing is Believing does adequately display the breadth of Darin's immense talent. He fearlessly performs styles as antithetical as the blues (Nat Adderley's "Work Song and Muddy's "Got My Mojo Working, where he plays a mean harmonica) and the book of Sinatra ("I've Got You Under My Skin, "You Make Me Feel So Young, and "Come Rain or Come Shine ).

Darin was contemporary with his covers, performing Bread's "If, Creedence Clearwater Revival's "Proud Mary (with Bobbie Gentry), the tragic Tim Hardin's "If I were a Carpenter, and Neil Diamond's "Sweet Caroline. And he achieved classic status with the songs that would forever be associated with him: "Splish Splash, "Beyond the Sea, and "Mack the Knife.

The uninitiated Darin listener watching this video need heed the words of Coleridge, who addresses the responsibility of the creative artist in his Biographia Literaria:

"...yet so as to transfer from our inward nature a human interest and a semblance of truth sufficient to procure for these shadows of imagination that willing suspension of disbelief for the moment, which constitutes poetic faith.

These Darin performances are, to a great extent, period pieces that to some may initially seem trite and schmaltzy. To these listeners I suggest patience and further study on Darin who, in fact, does ultimately fully engage the listener. He was a true original who excelled at all he did: music, television, movies, and as a spokesperson for his art and beliefs. Bobby Darin was a Mozart in our midst.

The single biggest deficiency in this collection is its poor annotation. There is precious little information regarding the sources of these Darin appearances which, for historical reasons alone, would have been valuable, in addition to fleshing out the viewer's perspective and understanding of contexts and the performances themselves.

This quibble aside, Bobby Darin was a fabulously talented performer who crammed into a romantically short 37 years a resume of performance art rivaling the artistic output of the short-lived Classical and Romantic composers. This collection shows an important corner of this important artist's output, offering a new generation a glimpse of greatness.