By Ian Patterson
September 27, 2013
Sign in to view read count 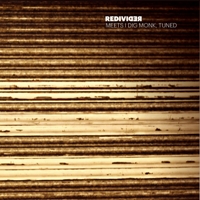 Jazz/creative music fans who dig palindromes and anagrams had to wait a long time between trumpeter Miles Davis' Live Evil (Columbia, 1971) and ReDiviDeR's debut Never Odd or EveN (Diatribe Records, 2011). Forty years must be an eternity for addicts of words that spell the same way backwards as they do forwards. In addition to the wordplay, ReDiviDeR's debut announced the arrival of an exciting two-horn, no-chord band on the Irish jazz scene. Inspired by modernists such as bassist Charles Mingus and drummer Jim Black, the Dublin quartet's grooving improvisations sought a path between past and future.

ReDiviDeR's second CD might hoodwink fans of pianist Thelonious Monk, when the title—an anagram of United Kingdom—simply references the contributions of cellist Ben Davis, keyboardist Kit Downes, guitarist Alex Roth and trumpeter/electronics musician Alex Bonny. Each guest musician features on one of the five main tracks, adding new textures to ReDiviDeR's left-field grooves and spirit of adventure. Elements of free impro, the absence of chords and pockets of abstraction may deter those whose allegiance is to more conventional jazz but the music holds harmonic sophistication, in-the-pocket grooves and—as Monk said of his music to those who proclaimed it difficult— "melodies a nitwit can understand."

Striking juxtaposition is the music's leitmotif; Troyka keyboardist Downes on Rhodes and drummer Matthew Jacobson's loose-limbed improvisation on "Twin Kodes" is counterbalanced by bassist Derek Whyte's measured lines and trombonist Colm O'Hara and alto saxophonist Nick Roth's tight unison riffs. Keyboard joins trombone and sax as the riffs stretch into more flowing lines. The tension recedes in a serene passage whose centerpiece is O'Hara's lyrical solo. Downes and Jacobson then resume their earlier free dialogue as bass, trombone and sax follow a more clearly signposted route. All converge in a thrillingly knotty finale, with the potential for chaos sewn into the tightly interwoven and highly disciplined collective lines.

On the aptly titled "Animal Code" trumpet, sax and trombone create oases of harmonic calm amid stampedes of dissonance; brays, squonks and squeals converge in varying waves of intensity in an uneasy yet captivating dramaturgy. A strolling vibe on the bass, cello and brushes intro to "Bin Saved" gives way to an edgier, cello driven section. Davis' singing narrative is punctuated by plunging bass arco notes. Roth's barreling alto solo is underpinned by cohesive ensemble rhythms. A trombone solo of funereal second line solemnity follows, with appropriately simpatico accompaniment. The experimental King Crimson of the mid-1970s springs to mind on this episodic composition.

Electric guitar leads from the front on the generally less dense, though no less sinewy pathway of "Velvet Pouch." Roth's extended solo leans between blues-rock and jazz on the set's most free-flowing offering. "May I Agree" is a taut, though melodic through-composed number. O'Hara's trippy trombone solo takes place over a repeating bass ostinato and lightly skipping drums. Sax and trombone repeat descending runs until the number expires.