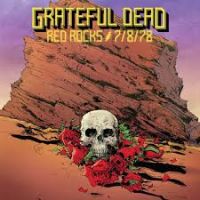 As much of a bonafide treasure trove is the existing Grateful Dead vault as maintained by David Lemieux, Nicholas Meriweather and their team(s), there are some holes where the aforementioned archivists are constantly in the process of filling with research and negotiations to uncover and regain ownership of items not already ensconced in their rightful location. The source of this recording, the so-called 'Betty Boards' (so named for Dead sound engineer Betty Cantor-Jackson), is just such content.

The version of "Bertha' that begins the Grateful Dead's recording of their second ever concert at Red Rocks Colorado on July 8 1978 opens with the crisp rendering of the opening chords and a swift descent down the ivories from pianist Keith Godchaux. It's an uncommonly dramatic flourish from Godchaux who, with his spouse, vocalist Donna Jean, would leave the band later that year, but immediately following the understated authority in the guitar played by vocalist/composer Jerry Garcia and rhythm guitarist/vocalist Bob Weir, it sets a multi-faceted tone for the entire show that appears here over the course of three compact discs.

A cull from a twelve-CD package which includes all five shows by the iconic band recorded by Betty Cantor- Jackson that summer month, it's a mix of the familiar and the unexpected in just the right proportions. For instance, the aforementioned opening segues into what usually serves as a homestretch barn-burner, "Good Lovin,'" rendered here with uncommon restraint, but no loss of gusto, by Weir (who assumed leadership of the Young Rascals cover when Ron "Pigpen" McKernan passed away five years earlier).

In the wake of the aptly frenetic close of that number, the band bounces with nonchalance through "Dire Wolf," thereby reaffirming the careful balance of dynamics they were utilizing here. At this point too, it becomes clear that the alternating of lead singing between Garcia and Weir was settling into a pattern that is especially effective in the context of this show at the picturesque venue: the titular leader gently commands balladry in the form of "It Must've Been the Roses," while the youngest member of the group handles the upbeat material such as "New Minglewood Blues." But the shared prominence doesn't become predictable precisely because the septet doesn't adhere to the same pattern throughout the concert. In fact, the Grateful Dead utilize this varied approach as a means to an end, that is, flexing their collective vocal and instrumental muscles in preparation for more expansive musicianship the group tenders later on in the show.

The transition to more broad improvisation occurs two tracks in to the second disc here where a mournful "Ship of Fools" precedes "Estimated Prophet," into which the unit ascends into nearly an uninterrupted hour of segues including "The Other One." One of the Dead's most long-standing jam warhorses becomes, not surprisingly, a gateway into and through "Eyes of the World," only to be followed by the "Rhythm Devils" interlude conducted by percussionists Bill Kreutzmann and Mickey Hart moving into the ambiance of "Space."

The cinema-in-song that is "Wharf Rat" usually signals the impending end of a show, a notion seemingly reaffirmed by the jubilant intensity of "Sugar Magnolia" But in keeping with the series of decoys intrinsic to this appearance, the Dead ambitiously move from euphoria to majesty via the truncated "Terrapin Station; " what might've sufficed as a surprising instead leads directly to "One More Saturday Night," it's high spirits elevating even further when the Grateful Dead conclude with the late Warren Zevon's "Werewolves of London: " the band matches the twisted noir whimsy of this rare cover by dint of their own carefree attitude, no doubt an implicit expression of the group's elated state of mind having just completed an extraordinary performance.

David Lemieux is rarely given to gushing, but in his essay inside the vividly-designed graphics of this digi-pak, the rhapsodic observations he offers are fully justified, beginning with the superlative sound quality to the exemplary choice of material and the musicianship.