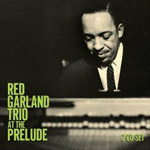 Following the success of Bill Evans: The Complete Village Vanguard Recordings, 1961 (Riverside 3RCD-4443-2, 2005) the Concord Music Group has slated for release several historically complete thematic sets. Among these is The Red Garland Trio At The Prelude. The some 135 minutes of music comprising three sets on the evening of October 2, 1959 at Harlem's Prelude Club, has characteristically been released haphazardly. Finally compiled in a single set is music that had previously been spread over four separate releases:

The significance of this recording is the fact that Red Garland was pianist in Miles Davis' first great quintet (consisting of Davis, Garland, John Coltrane, Paul Chambers, and Philly Joe Jones) from 1955 to 1958, the last recording being made with Davis at the Spotlight Lounge in Washington DC, November 1, 1958, during the transition period between the classic quintet and Miles' famous sextet of Milestones (Columbia CL 1193, 1958) and Kind of Blue (Columbia CL 1355, 1959). Garland left Davis' band in late 1958. Garland's Prelude sides followed the completion of Kind of Blue by eight months.

Red was born in Dallas, Texas on May 13, 1923. Not from a musically-inclined family, Garland demonstrated an early aptitude for music. He studied the clarinet and alto saxophone before switching permanently to piano in the early 1940s. During this same period Garland enjoyed a short career as a welterweight fighting a young Sugar Ray Robinson before making the switch to a full-time musician.

Following World War II, Garland performed and recorded with Roy Eldridge, Coleman Hawkins, Charlie Parker, and Lester Young. He never wanted for work, being kept busy in such jazz centers as New York and Philadelphia. Garland joined the now classic Miles Davis Quintet in 1955, featuring John Coltrane, Philly Joe Jones and Paul Chambers. This most famous of jazz ensembles, their Prestige albums recordings included Workin', Steamin', Cookin', and Relaxin'. Garland also performed on the first Davis Columbia release, 'Round About Midnight and continued playing with Miles up through 1958. Garland rejoined Davis in the studio for the Columbia release Milestones.

By the time of the Prelude Sessions, Garland was working with a Philadelphia rhythm section consisting of bassist Jimmy Rowser and Drummer Charles "Specs" Wright. Garland used Rowser and Wright on Coleman Hawkins with the Red Garland Trio (Swingville SVLP 2001, 1959) and Red Garland - Satin Doll (Prestige PR 7859, 1959) in the period just prior to the Prelude sessions and the band developed a dense simpatico for the live date where Garland's highly personal bebop was solidly supported.

Critic Ralph Gleason considered Red Garland "one of a handful important piano players in jazz [during the 1950s]. Other critics thought of Garland as a glorified cocktail pianist. The latter is too harsh, for Garland's talent, particularly in the blues is non-parallel. One needs only to listen to "Please Bring Me Someone to Love from Red Garland's Piano (Prestige, 2004) for proof.

Should that net be enough proof of Garland's Blues prowess, the set opener at the Prelude, Basie's theme from the TV show M Squad (starring a young Lee Marvin) should provide all the proof needed. Things remain upbeat with "There Will Never Be Another You and "Let Me See before they slow down for "We Kiss in a Shadow. This is not the same high art of Bill Evans, but it remains succinctly superb and compelling. Garland played everything with what appeared and sounded like any effort. He was the walking repository of the Great American Song Book.

Ellington's "Satin Doll sounds symphonic, ringing with Garland's block chording, arpeggios and octaves. We are fortunate we get to hear two takes of this masterpiece. As with the Bill Evans' Vanguard Recordings, a false start on Neal Hefti's "'Lil Darlin is included here giving the disc a palatable authenticity. Garland's three takes of "One O'clock Jump (set closers) perfect studies in the art of William Basie, at top tempo. Garland drops in a standard from the old Miles Davis book, "Bye Bye Blackbird, displaying his considerable yet understated bebop chops. Garland turns in a blistering "Cherokee that was previously unissued before closing the disc with an unreleased "One O'clock Jump.

Red Garland was a gracious accompanist in the Davis band and that translated to his allowance of copious solo space to his rhythm section. There may be an argument that The Red Garland Trio at the Prelude is the last of the great Garland Trio recordings. The pianist performed and recorded sporadically until his death at 61 years old in 1984. But it is these Prelude sides illustrate Red Garland at top form in his craft.